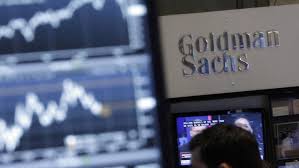 The boss of Goldman Sachs today admitted his prediction about Brexit’s impact on the City of London was wrong but insisted the worst was still to come.

Lloyd Blankfein had warned banks would abandon London in favour of continental cities like Frankfurt.

He said today he was surprised there had not been ‘more of a dramatic effect’ since the vote to leave the EU in June 2016.

The Goldman CEO insisted his bank would not have decided to build a new headquarters in London if the decision had been made after the referendum.

Mr Blankfein told Politico: ‘Therefore, there are decisions made today, and people who are building buildings four years from now won’t be.

‘So far what’s evident is that we would’ve thought decision-making would’ve been altered by now [due to Brexit].’

‘Maybe there’s been a lag but certainly, there hasn’t been a dramatic fall-off.’     Bundesbank leader Andreas Dombret yesterday said there is widespread ‘reluctance’ among bankers living in London to move abroad.

And he said the Square Mile will remain the continent’s ’eminent financial centre’ after Britain quits the bloc.

His words come as political leaders across Europe compete to try to lure London’s lucrative financial services away.

While Frankfurt, Dublin and Amsterdam are all also in the race to convince bankers to decamp from the UK.

But speaking to the BBC Radio 4 Today Programme this morning, Mr Dombret said: ‘I’m sure other cities are seeing CEOs too, it’s not only Frankfurt.

‘We are just talking to those CEOs planning to move should they want to but we don’t advertise the financial centre.

‘I believe London will continue to stay an eminent financial centre of this region.

‘I hear that there is quite some reluctance in the City of London – of people working there, of bankers working there – to move.

The French President spoke in English as he schmoozed with bosses from firms including JP Morgan, Google and Facebook at the famous chateau. Emmanuel Macron wants to lure business away from Britain to France after Brexit

‘We got this, whether they moved to Frankfurt, Amsterdam, Dublin or Paris.

‘There is a big willingness to stay in London and some of those who have been asked to go would rather take a cheque and stay than move.’

His words are a boost to Theresa May who has said that London is so strong as a financial capital it will be able to fully weather whatever uncertainty Brexit may bring.

Former chancellor George Osborne had campaigned for Remain in the EU referendum by warning that Brexit would harm the economy.

But his warnings – dubbed Project fear by critics – have failed to materialise as the UK’s economy has defied critics to remain strong.