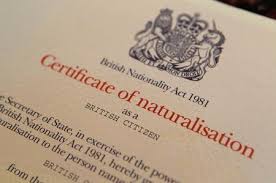 Will Britons living in other EU member states have the opportunity to naturalise? Some say this would be a potentially fraught and divisive policy option, particularly for those living in states that do not allow joint citizenship. Instead, perhaps we should reconsider the legitimacy of a narrow majority vote that deprived millions of EU citizens, UK and non-UK, of fundamental rights and freedoms.

Would naturalisation in their country of residence be a suitable policy option for UK nationals who are living in EU member states? In answering the question, I make a basic assumption: that the principle of majority rule in public policy formation and law making is only one of the main conditions of democracy. The other two are respect for the rule of law and the protection of fundamental rights and freedoms, which are often constitutionally enshrined. In fact, the latter two conditions guide, shape and circumscribe electoral majoritarianism.

In this respect, making the latter the only and/or the overriding consideration makes it harder, not easier, to provide an adequate justification that a decision or a policy is democratic. To put it differently, the principle of majority rule does not have an unlimited scope in constitutional democracies: it excludes the power to alter rights and fundamental freedoms, or to deprive numerical minorities of their rights.

This thinking applies to the Leave vote in the EU referendum outcome, and the Prime Minister’s decision to make it an authoritative mandate for Brexit. For the (slim) majority’s preference for the UK to ‘take back control’ – whatever this might mean – and thus leave the EU was not properly weighed against the loss of citizenship and residence rights by millions of EU citizens. Nor was the possible diminution in rights protection for all UK citizens and residents post-Brexit at the forefront of any concerns before and after the referendum.

Leaving aside my uneasiness about the existence of a democratic deficit if a slim majority can make authoritative decisions which can injure significantly a portion of the community and deprive it of their rights, including citizenship rights, by referendums – thereby evading the channels of accountability before representative assemblies – I would like to counsel caution to those who think that a gesture of allowing the naturalisation of all those citizens affected by Brexit could provide an adequate compensatory mechanism for the cancellation of EU citizenship and residency rights.

First, naturalisation laws in the 28 Member States vary, which would result in divergence and inequalities in the treatment of EU citizens. So do processing times and naturalisation rates across the Union.

Thirdly, it would be difficult to justify the conversion of EU citizens into nationals through tests, classes, oaths and citizenship ceremonies. The new taxonomy of citizenship consisting of the ‘ins’ and ‘outs’ will be seen to be an unnecessary and costly imposition on all those citizens affected by Brexit who have been incorporated into host societies, and have been treated as rightful participants until now.

It is also likely to damage societal relations and create narratives of ‘othering’, since current members would be seen as unworthy of membership unless they naturalise. Creating hierarchical relations which treat existing members having a secure residence and free movement rights as non-members – and thus as inferior – entails a denial of recognition and respect. In addition, by creating a new positional relativity which would invite executive discretion, that is, the rejection of naturalisation applications from EU citizens who are deemed to be ‘undesirable’ or ‘not yet ready for full inclusion and citizenship’, the evolutionary sequence of naturalisation may look at first sight incorporative –  but, in reality, is founded on distancing, separation and, quite likely, on discrimination.

Exempting UK nationals from the normal naturalisation procedures and facilitating their automatic or semi-automatic naturalisation by registration or by declaration of option are certainly preferable. This would require an application for citizenship, but the process would be quick, more inclusive and non-discretionary. The EU member states could in theory still require residency requirements and the absence of a criminal record. They could also differentiate among periods of residence. For instance, residence for a period exceeding ten years could prompt automatic naturalisation, while shorter periods of residence would activate semi-automatic naturalisation. Naturalisation by declaration of option, on the other hand, would grant EU citizens the possibility of opting out from national citizenship if they wish to retain or not to compromise in any other way their national citizenship.

Although there are important differences among the policy options mentioned above, the latter is more normatively defensible -bearing in mind EU citizens’ existing rights and effective links with the societies of residence. However, even this option does not answer adequately the question why national citizenship should be superimposed on EU citizenship, thereby (re-)making nationality the basis of political membership and identity in contemporary Europe.

Let me conclude by returning to the difficulty I identified in the opening paragraphs of this post: namely, that the unrestrained operation of the principle of majority rule subverts, rather than advances, democratic political processes. Certainly, when a ‘pro-Leave’ majoritarian decision leads to millions of people being deprived of their rights, effectively undermining their life worlds and the future of their families, then there is no reason for thinking that it deserves to be respected by all those who believe in the value and the rights-affirming nature of constitutional democracy.

The domestic electoral cost of aborting Brexit cannot outweigh the political costs of damaging democratic constitutionalism and cancelling rights. Nor can it compensate for the unnecessary hardship inflicted upon millions of individuals, including 1.2m British nationals living in the European Union. It would be highly imprudent to consent to, or accept, such a (slim) majority misrule.