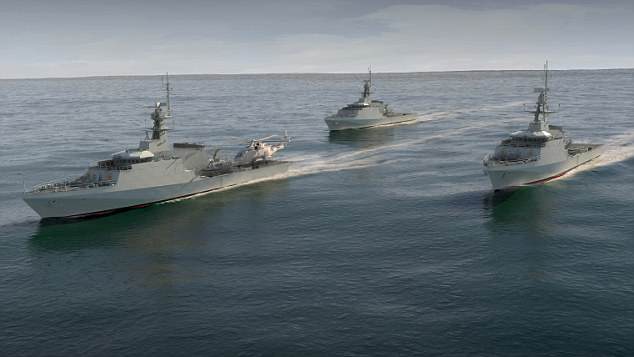 The Royal Navy is to keep old ships it was due to decommission to ensure it has enough vessels to police Britain’s borders after Brexit.

Ageing offshore patrol vessels had been due to be scrapped next year after replacements are commissioner.

But both Batch 1 and Batch 2 ships will now stay in service, except for one of the old ships, HMS Severn, which has already been decommissioned last year.

They would bolster the maritime defence with their presence and increase the overall number of warships capable of patrolling Britain’s coastal shores at any one time.

Rear Adm Gardner said the Navy is ‘very keen’ to keep the ships but said currently it has only drafted contingency plans to keep them in service should the government ask.

A £12.7 million fund has been allocated by the government from the EU exit preparedness fund to preserve the fleet should they be required after Brexit.

Ultimately, however, Rear Adm Gardner said it is too early to know whether the fleet will be retained.

He said: ‘At the moment no decision has been taken about what their future could be.

‘I’m keeping the ships in a state of operational readiness.

‘[This means that] as the future becomes a bit clearer post-Brexit, and as our requirements are more broadly understood, we will be able to make decisions about whether or not we will seek to retain and operate them as additional units in the Royal Navy or find some other solution.’

Batch 1 was made up of four ships, however after HMS Severn was decommissioned last year only HMS Tyne, HMS Clyde, and HMS Mersey remain.

Asked if they could play a critical role in protecting the UK’s borders after Brexit, Rear Adm Gardner said: ‘Absolutely they could.

‘It wouldn’t come without its challenges because we would have to find the crews but there are ways and means for us to be able to do that.

Retaining the older OPVs would help to free up the more advanced Batch 2 patrol ships (pictured) which can carry out duties such as counter-terrorism, counter-piracy and anti-smuggling operations

‘It’s certainly something the Royal Navy would be very, very keen and willing to undertake should we be asked to do so.’

What do offshore patrol vessels do?

Last year HMS Severn was decommissioned after just 14 years of service. Her three other sister ships are still in active service.

They conduct patrols of the UK’s waters and have also been key in tackling drug gangs and providing aid in humanitarian crises.

Currently there are three based around the UK and Europe with HMS Clyde, stationed near the Falkland Islands.

HMS Forth, of Batch 2, is due to be operational active by September. The majority of the remaining four batch two warships will join the fleet in 2019, with the last entering service in 2020.

He added: ‘This is, however, a political decision and down to the government to decide what the requirement is and then to ask us to fulfill that requirement.

‘But until we can get firm direction by the government we are just planning.’

Last month Guto Bebb, parliamentary under-secretary for defence, said a £12.7 million fund had been allocated from the EU exit preparedness fund to retain the three ships if necessary.

Retaining the older OPVs would help to free up the more advanced Batch 2 patrol ships which can carry out duties such as counter-terrorism, counter-piracy and anti-smuggling operations.

She said the fleet were ‘absolutely vital’ to the UK’s defence and reach overseas.