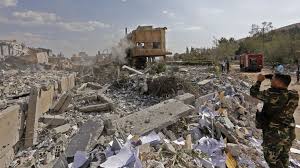 The Spanish government issued a statement on Saturday morning in response to the attacks launched by the United States, the UK and France on facilities in Syria.

“An attack with chemical weapons is a crime against humanity. Those responsible for this and other previous attacks must be brought to justice.”

“We regret the paralysis of the Security Council on this issue. We always prefer concerted international action to unilateral actions. When they do happen, they must be proportional, as has been the case on this occasion.”

“Those who support the Syrian regime must exert all necessary pressure to avoid attacks against the civilian population. Continued ceasefire violations are not acceptable. But using chemical weapons is a qualitatively different matter and extremely grave. Unfortunately, it is not the first time, [and] we wish it to be the last.”

“Only a political transition process, as reflected in Security Council resolutions, can bring a definitive peace to Syria. It is a process that must be led by the United Nations. Spain fully supports this process as the only way to put an end to images like the ones we have seen recently of children dying and suffering horribly. Nothing justifies anything like that.”