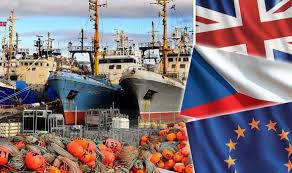 Hundreds of small fishing boats will be lost before Brexit is complete unless they are allowed to land bigger catches, industry figures have warned.

They fear a draft copy of the Fisheries White Paper suggests the existing fishing quota system will not be significantly reformed.

Jerry Percy, from their trade body, said the quota should be moved from big to small boats.

A government spokesman said he could not comment on leaked documents.

The draft white paper, dating from February and seen by BBC Radio 4’s Today programme, says the government acknowledges many businesses are based on the current quota system. Ministers will recognise that fact when considering potential changes, it adds.

Fishermen operating small boats fear that means there will be no change to the system for existing quotas, which is based on fishing volumes from the late 1990s.

Ministers will negotiate to win back extra quota from the EU, but how existing quota is allocated is down to national governments within the UK.

Smaller operators, which have long believed they aren’t getting a fair deal, don’t believe they will get any more quota out of Brussels any time soon so they are focusing on getting existing quota reallocated.

It has expanded its share by purchasing quota over the years.

The owner of the vessel told Today it needed the high quota because it caught low-value species, such as herring and mackerel.

“We do have by volume what appears to be a large amount. However, that quota is for low-value fish and we need to invest in large vessels in order to catch it,” Matthew Cox, chief executive of North Atlantic Fishing – which is part of the Cornelis Vrolijk multinational group – said.

The Cornelis Vrolijk is based in Hull and provides jobs for 60 staff there, but lands fish in the Netherlands, where it is currently docked undergoing repairs.

Mr Cox said British ports did not have the facilities the company needed and most fish was exported outside Europe so the UK was not an important market.

A spokesman for the Department of Environment, Food and Rural Affairs said: “The under-10m fleet plays an important part in our fishing industry and our coastal communities.

“Leaving the EU gives us the opportunity to design a new domestic fishing policy – one which is in the best interests of all sections of the fishing fleet and which allows our industry to thrive.”