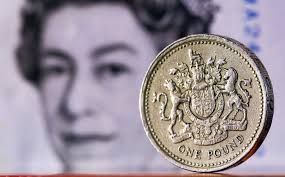 The pound has hit its highest level since the UK’s vote to leave the European Union in June 2016.

The pound gained more than 0.2% to $1.437 in morning trade, beating a post-Brexit vote high set in January.

However, the pound fell back slightly following official employment data showing that wage growth continued to lag one key measure of inflation.

Sterling has been boosted by expectations that the Bank of England will raise interest rates.

Dollar weakness after uncertainty about US trade policy has also been a contributory factor, traders said.

But since the beginning of 2017, it has started to recover.

Why has the pound been recovering?

Simon Derrick, head of currency research at Bank of New York Mellon, said the main reasons for the pound’s comeback against the dollar since the start of 2017 had been expectations about UK rate rises and increasing optimism over the Brexit process.

In November 2017, the Bank of England put up interest rates for the first time in 10 years, and in February the Bank hinted at an increased pace of rate hikes.

Most analysts expect it to raise interest rates again in May.

“Momentum is a huge factor,” Mr Derrick said. “There’s a lot of optimism around sterling.”

Is the rally likely to be sustained?

There are certain elements about sterling’s performance that “make me scratch my head”, Mr Derrick said.

The market is pricing in the best possible outcome from Brexit, with an orderly transition, whereas “all sorts of different outcomes could emerge”, he said.

For example, he said, it was still not clear how the issue of the Northern Ireland border would be resolved.

He added that the dollar’s weakness might also be short-lived.

What does a stronger pound mean for the UK economy?

British holidaymakers could find their pound stretches further, but conversely, tourists may not find the UK quite so attractive.

Tourism, which contributes billions to the UK economy, boomed in 2017 after the fall in the pound. Many Britons also chose to holiday at home.

Exporters also may not benefit from a stronger pound. The amount of goods exported by the UK manufacturing sector rose sharply after the referendum, with growth hitting a peak of 9.7% in March 2017.

However, companies which import goods or services tend to benefit from a stronger pound, because it makes the items they buy cheaper.

How is the pound doing against the euro?

The pound fell sharply against the euro following the referendum and has not been back above €1.20 since.

In 2015, the European Central Bank launched a massive stimulus programme designed to counter deflation and revitalise the economy after the financial crisis.

The euro strengthened in 2017 on the back of an improving eurozone economy and predictions that the ECB could start to scale back its bond-buying programme.