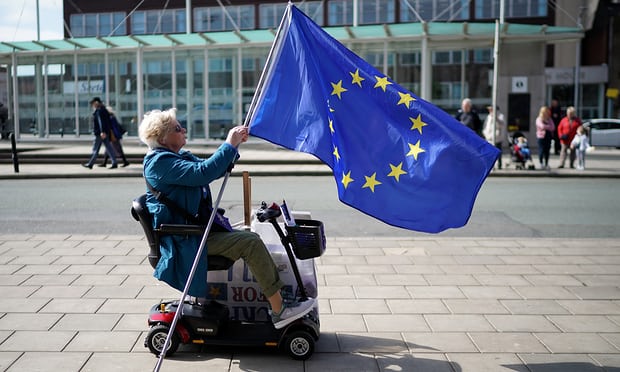 Brexit fatigue is letting Theresa May off the hook, and obscuring the fact that a U-turn remains our best option.

Brexit was predicted to be many things – triumphant, calamitous, impossible, a cinch – but never boring. Yet with less than a year to go, and vital questions still unanswered, Westminster’s interest has palpably waned. That partly reflects public disengagement. Europe is not raised much on the doorstep, say MPs, who are mostly grateful to talk about other things.

Brexit looks bad on all fronts. That’s why we’re pushing for a people’s vote

There are pockets of Brexit passion. On Sunday hundreds of people went to the north London launch of the People’s Vote, a cross-party campaign demanding a referendum on the final deal. A smaller counter-demonstration asserted the view (prevalent outside the capital) that one referendum was enough. In news terms, that event was no competitor to airstrikes in Syria or wrangles with Russia over the Salisbury poisonings.

Inevitably EU affairs drop out of the headlines from time to time. But there has been a general downgrade in Brexit urgency since provisional agreement was reached last month on a transition period. That means the article 50 deadline of next March applies only to the terms of withdrawal. The future trading relationship can be outlined in a “political declaration”, with 21 extra months to fill in the details.

Hardline leavers don’t like this smudging of Brexit boundaries, but they haven’t kicked up a fuss because they recognise that transition is a lethal trap for the remain cause. It kills EU membership right on time next March, while deferring any painful impact until 2021, well beyond current political attention spans.

Pro-Europeans already find it hard to foment mass opposition to Brexit, not least because the leader of the Labour party is happy leaving the EU. But the challenge of lobbying to preserve membership now is child’s play compared to how hard it would be petitioning for re-admission once the doors to the club have banged shut.

Transition doesn’t diminish the need for a deal, but elongating the timetable has taken some of the clock-ticking drama out of the story, easing pressure on Theresa May. Yet none of the problems that seemed desperate in January have gone away. There is still no magical method for keeping an invisible border in Northern Ireland while leaving the customs union. There is still no rival to the Treasury’s cost-benefit analysis showing only a downside to exit from the single market. A substantial majority of MPs still believe that Brexit is an exercise in damage limitation. Yet few dare to follow that logic to the end: when an action can only be measured in damage, the best limitation strategy is not to do it at all.

Deference to the referendum result is a powerful factor here, but not the only one. There is also our political and media culture that much prefers characters to processes. Brexit blips on to British radars not when important things happen in Brussels, but when Westminster politics turn colourful. A boisterous banality by Boris Johnson makes a splash. A technocratic torpedo in the form of a commission negotiating mandate, blasting holes in May’s Brexit ambitions, causes barely a ripple.

It has never been easy to excite a British audience with the technicalities of the EU. It is hardest of all with those who voted leave hoping it meant they would never have to be bothered by such things again. And there is great, understated power in the politics of not being bothered. There were many remainers in 2016 who had no affection for the EU but didn’t think it was worth the hassle of leaving. As Brexit day gets nearer, the balance of being bothered shifts. It starts to look like a palaver to go back.

Economists call this the sunk-cost fallacy – the tendency to factor in the psychological cost of time and money already spent when making a choice about the future. This is why people tend to buy random useless things, having driven a long way to get to the shops. To leave empty-handed feels like a waste of all that time on the road. But the lost time is irrecoverable – a sunk cost. It should have no rational bearing on current purchases.

The months of fractious politics, social division and economic uncertainty are the sunk costs of Brexit. They shouldn’t weigh against the potential benefits of retaining membership if, after gruelling negotiations, that looks like the best item on the menu. But a false intuition puts the weight there. British politics is deep in that fallacy. There is no enthusiasm in parliament for May’s Brexit, but nor is there a coherent lobby for a U-turn. Jeremy Corbyn is wedded to the idea of a better, socialist kind of Brexit. Most Tory MPs will vote for May’s bad deal if the alternative is a crisis that somehow propels Corbyn into No 10.

The prime minister herself increasingly calls to mind Macbeth, wearily committed to seeing a nasty business through to the end, “in blood stepp’d in so far, that should I wade no more, returning were as tedious as go o’er”.

Tedious, maybe. Not impossible. But it needs political courage and imagination. Those qualities are in short supply. There is instead growing complacency and fatalism around Brexit. The question of whether it should be done is treated as taboo by May and Corbyn. But the question of how it should be done hasn’t produced a credible answer to beat the option of not doing it at all. So we creep in this petty pace towards the final act, as if it were all predestined. It isn’t. If the UK does end up leaving the EU, the referendum result will be only half the reason. The other half will be a parliament that knew Britain was going the wrong way, yet couldn’t be bothered to lead the way back.