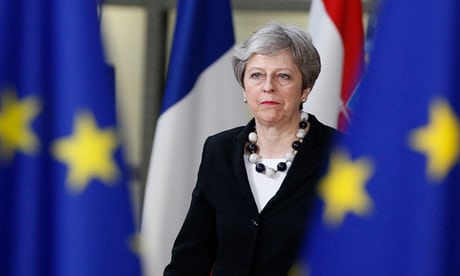 Senior British and EU officials start to discuss trade ties over a year after article 50 triggered.

Each Brexit scenario will leave Britain worse off, study finds

The talks were mostly limited to a formal presentation on the negotiating guidelines agreed by EU leaders in March and setting a schedule for future meetings. Nonetheless, it is a significant moment for the UK, 10 months after the Brexit secretary, David Davis, was forced to bow to the EU’s timetable having previously promised the “row of the summer”.

Four more rounds of negotiations have been pencilled in ahead of a crunch EU summit in June, when European leaders will next assess Brexit. Two rounds are planned for May and two in June, with the aim of working through a long list of unresolved issues on the divorce, including Ireland and an outline text of the future relationship.

The EU is undecided about how much detail should go into the text on the future relationship before Brexit day in March 2019. Germany is pushing for a detailed, legally precise text to avoid surprises during the post-Brexit trade talks, but Scandinavian and Benelux countries prefer to keep the document vague to give the UK maximum room to change its mind.

EU officials are watching the passage of Brexit legislation in the UK closely, paying special attention to an amendment on staying in the customs union. “Should they decide to say in the customs union, I don’t see why the EU would say this is not feasible,” said a senior official, adding that the EU took no view on the hotly contested issue of whether there should be a referendum on the final deal. “We are all pretty agnostic on that, because these are all domestic issues to be settled,” the source said. “It is only natural to take a clear look at the future before you jump into the abyss.”

Before Wednesday’s meeting, the European parliament’s Brexit coordinator, Guy Verhofstadt, stepped up his call for guarantees to ensure that EU citizens could avoid the “bureaucratic nightmare” that has ensnared the Windrush generation.

Speaking in the European parliament in Strasbourg, Verhofstadt called on the chief Brexit negotiators, Davis and Michel Barnier, to be ready to make changes to the withdrawal treaty if MEPs deemed that modifications were needed. “Certainly, after the Windrush scandal in Britain, we want to be sure that the same is not happening to our European citizens,” he said.

Home Office officials will face a specially convened group of MEPs next Tuesday in Brussels, where they will be quizzed on the procedure for 3.5 million EU citizens to obtain special status. Following that meeting, “if there are changes needed, we will also communicate to the negotiators, to David Davis to Michel Barnier, what modifications are needed to avoid problems for EU citizens” Verhofstadt said.

The European parliament is not negotiating Brexit, but it has the power to veto the final deal, and MEPs insist they are ready to do so.

Wednesday’s talks are being led by Barnier’s deputy, Sabine Weyand, and the UK prime minister’s Europe envoy, Olly Robbins. Before talks on the future relationship, the pair met to discuss progress on resolving the status of the Irish border, the most intractable issue of the talks.

As that meeting got under way, Donald Tusk, the head of the European council, reiterated his warning that the UK risked leaving the EU without a deal if there was no solution on Ireland. “The UK’s decision on Brexit has caused the problem, and the UK will have to help solve it,” he told MEPs. “Without a solution, there will be no withdrawal agreement and no transition.”

The Irish government, which is frustrated by slow progress, is pressing for a solution to the border question by June. So far Ireland has benefited from solid support from the rest of the EU, as was illustrated when Manfred Weber, the leader of the largest European parliament group, told MEPs on Wednesday: “We are all Irish in this regard.”

Diplomats say support for Ireland is strong, although some think the Irish government’s hopes of solving the issue in June are unlikely to be realised. “I find it a bit unrealistic because [the Irish issue] is so political, it can only be wrapped with everything if we have crossed all the Ts and dotted the Is, as part of a package on the future relationship,” one said.

The British government has long wanted to discuss its preferred options for the Irish border question. Officials have proposed two options: an untested customs arrangement that would allow British officials to collect EU duties, or a combination of technology and waivers on border checks for small business.

Although these ideas have been derided as “magical thinking” in Brussels, the British side argues that they deserve a careful hearing in face-to-face talks. The UK will, however, encounter wariness from thousands of miles away. Greece and Cyprus are among the countries that want to avoid the British model becoming a precedent for Turkey or any other non-member state.

UK officials have so far been unable to puncture scepticism about their ideas for solving the border question. One EU diplomat argued that London was “going through the motions” of discussing their proposals. “My guess would be that it would take a few rounds for them to accept that they are dead on arrival and then we can move on.”