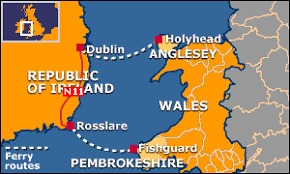 A delegation of Welsh business people are heading to Dublin to “build relationships” ahead of Brexit.

They will meet potential customers and receive advice on trading in Ireland.

The Irish Republic is the fourth biggest destination for Welsh exports but Brexit has raised questions over future trade between the two countries.

Wales exported £955m worth of goods to the Irish Republic in the 12 months to June 2017 and Irish businesses support about 11,000 jobs in Wales.

UK director of the British-Irish Chamber of Commerce Paul Slevin, who has helped organise the visit, said: “Ireland is growing at 7% GDP and this trip will be about building on that special relationship between Wales and Ireland.”

“Post-March 2019 Ireland will be an English-speaking place in the EU for Welsh companies to do business with, and only a 40 minute flight from Cardiff.”

“It’s pretty simple for companies to trade in Ireland but also through Ireland.”

Robert Lloyd Griffiths, Wales director of the Institute of Directors, is part of the delegation.

“It’s to build relationships with businesses in Ireland and with politicians,” he said.

“In these particular times it’s to re-emphasise the fact we need to develop new ways of working together.”

Mr Lloyd Griffiths added that businesses need to make contingency plans as they continue to wait for more detail about what leaving the EU could mean.

The Welsh Government has said it wants a deeper partnership with Ireland post-Brexit.

But it it is concerned the UK’s government commitment to leaving the EU’s Single Market – which allows goods and people to move freely between member-states -could make trade between Wales and Ireland more difficult.

Prosteel Engineering is a manufacturing company based in Caldicot, Monmouthshire.

The firm does not currently export its products but company director Richard Selby will be travelling to Ireland to explore business opportunities.

“We don’t know what’s happening but one thing we can do is establish relations in Europe.

“Ireland is a neighbour, there are no barriers to trading in terms of language and there’s potentially an opportunity to start doing some trading out there.

“You can’t really worry about things you can’t control but you can do this – you can look at other countries.

“You can’t wait for decisions by other people.”