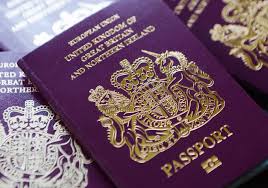 The government has officially confirmed that Franco-Dutch firm Gemalto will make the UK’s post-Brexit blue passports.

Earlier, the UK’s De La Rue said it had abandoned its plan to appeal against the government’s decision to award the contract to Gemalto.

Chief executive Martin Sutherland told the BBC he remained “surprised and disappointed” by the decision.

But the Passport Office said the process had been rigorous and fair.

It added: “With a contract value of approximately £260m, this will deliver significant savings compared to the £400m contract awarded in 2009 and provide value for money to the taxpayer.”

The Passport Office said the contract would extend Gemalto’s presence in the UK and add about 70 jobs to its existing workforce in the country.

It said income would be about £60m to £65m. It blamed £4m in costs for tendering to continue making UK passports, as well as delays in other contracts.

De La Rue’s Mr Sutherland had initially said the decision to award the contract to Gemalto was “shocking” and pledged to appeal.

But he told the BBC’s Today programme that the firm had now reconsidered.

He added: “We’re a business, we have to make pragmatic business decisions.

“We’ve done our homework, we’ve taken legal advice, we’ve looked at, frankly, the likelihood of overturning the decision and the sensible thing for us to do is to refocus our efforts elsewhere and to move forward.”

The government then granted a two-week extension in a process to decide who would make UK passports after Brexit.

That appeal process ended at midnight on Tuesday.

A spokesperson for De La Rue, said: “As we initially announced, we have looked at all possible avenues open to us, and thoroughly evaluated all our options.

“Following four weeks of intense consideration and clear legal advice, we have taken the decision not to challenge the award of the UK passport contract.”

De La Rue has held the contract to manufacture British passports since 2009. It claimed that it had been “undercut on price” by Gemalto.

The company makes British passports at its Gateshead factory, where it employs around 600 people.

Mr Sutherland said: “We have the contract for another 18 months, that gives us plenty of time to take stock, refocus and drive forward on the international front so we haven’t made any decisions about jobs in Gateshead.”

Full-year operating profit will fall short of £70.2m in operating income for the previous 12 months.

As well as the cost of bidding to make post-Brexit passports, it said there had been “delays in the shipment of certain contracts” in the last week of the financial year.