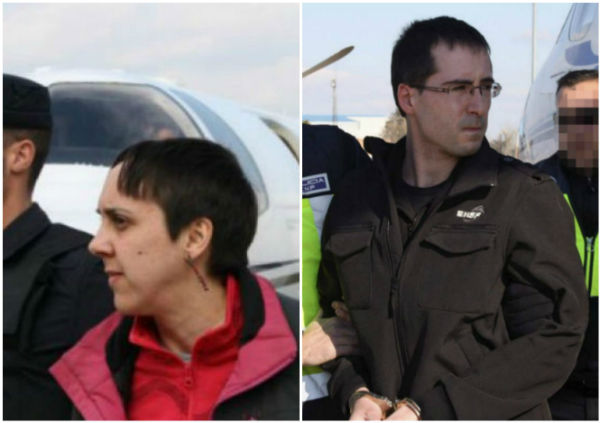 Spain’s Supreme Court confirmed 535-year prison sentences for two ETA militants, it said Wednesday, just weeks before the Basque separatist group is expected to announce its dissolution after decades of violence.
Liher Aretxabaleta Rodriguez, 38, and Alaitz Aramendi Jaunarena, 40, were handed the sentence last year by Spain’s National Court, which deals with terror cases, but they appealed it.

They were sentenced for 45 “terrorist murder attempts,” according to a ruling by the Supreme Court, which rejected their appeal.

They are also accused of having placed a car bomb in the San Blas district of Madrid in May 2005 “with the intention of causing as much damage as possible, accepting the potential death or injuries of people there or nearby”.

On May 25, a call was made at 8.45 am to Gara, a Basque daily that has traditionally been ETA’s mouthpiece, warning that a van was going to explode three quarters of an hour later in a specified road in Madrid.

The explosion went ahead and caused injuries — most of them involving people’s hearing — as well as damage to vehicles and buildings.

Aramendi is currently serving an 18-year jail sentence in France for belonging to an illegal organisation with the intention of preparing a terror act.

Aretxabaleta was handed over to Spain by France in 2011.

The jail sentences come as ETA is thought to be preparing its final dissolution, which sources close to the case say will happen “before the summer” and even as early as May.

The group announced a permanent ceasefire in 2011 and last year laid down its arms after waging a violent decades-long fight for independence responsible for the death of at least 829 people.

The northern Basque Country is now gearing up for the dissolution of a group created in 1959 at the height of Francisco Franco’s dictatorship, though question marks remain over how to move forward.

Nationalists and peace negotiators want former ETA prisoners to be reintegrated into society as a necessary step for cementing lasting peace, while some victims are first demanding the separatist group apologise for its past deeds.