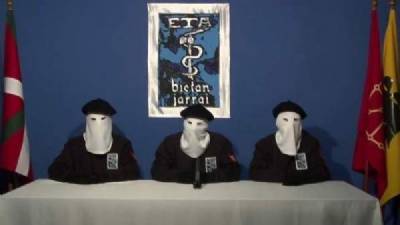 Basque terrorist organisation ETA says it will formally disband and will announce this in public in Bayonne, southern France, over the first weekend in May.

The separatists, who have not carried out any armed attacks since summer 2009 and whose last major bomb blast was on December 30, 2006 at Madrid airport T4 car park, says it will be calling a press conference on Friday with the para-political association Bake Bidea in Iparralde, south-western France, when it will ‘announce an event of international importance’ in Bayonne on May 5.

ETA says various institutions, including the Basque regional government, unions and political parties will be invited to the Bayonne announcement.

Friday’s press conference will be presided by Bake Bidea, part of the Social Forum and the International Contact Group (GIC) with Raymond Kendall at the helm

Although the exact terminology used by ETA to explain the Bayonne conference is not clear, it strongly points towards the cell’s having decided to dissolve.

The Basque Country regional government says it is not going to ‘get carried away with speculation’ but that once ETA reveals its decision, it will ‘evaluate it accordingly’.

Regional television channel ETB announced last night (Wednesday) that ETA appeared to be planning to break up on May 5.

Meanwhile, 11 days ago, Arnaldo Otegi – leader of the Basque reunification political party EH Bildu – announced in Bayonne that the terror organisation would ‘take fresh steps in the forthcoming weeks’.

Otegi’s comments came on the first anniversary of ETA’s formal disarmament, which was on April 8, 2017.

ETA has been around since the early 1970s, and this decade and the 1980s were its most active, with literally thousands of shootings and bombings leading to hundreds of deaths.

They frequently targeted authorities, including the Guardia Civil and politicians, as well as tourist hotspots to ensure their attacks were as newsworthy as possible.

Violent action in summer 2002 included a major blast in the Guardia Civil living quarters in Santa Pola (Alicante province), where the six-year-old daughter of an officer was killed, and a car-bombing in Gandia (Valencia province).

Attacks the following summer included blasts at hotels in Alicante and Benidorm, and in January 2005, ETA bombed Hotel Port Dénia in the town of the same name on the Alicante province coast.

A waitress suffered minor injuries, but nobody was hurt – largely because of ETA’s misunderstanding of the differences between Spanish and British culture: the bomb was set to go off in the dining hall at 15.00, when the terrorists thought the guests would be at lunch, but the holidaymakers were all from the UK and had long since finished eating by then, meaning the explosion happened in an empty room.