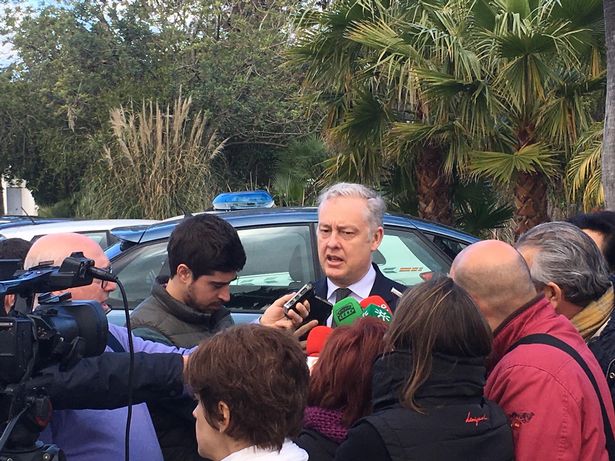 Simon Corner, 35, faces extradition to Spain to face trial over the death of Lisa Brown, 32, in November 2015.

A British fugitive wanted over the death of a mum who went missing in Spain has been arrested at Heathrow.

Simon Corner, 35 – who faces trial over the disappearance of Scot Lisa Brown, 32 – was held under a European Arrest Warrant at Heathrow Airport.

Corner was arrested on Monday for ‘conspiracy to murder’, a spokesman for Metropolitan Police said.

Lisa’s family offered a £100,000 reward for information on Corner’s whereabouts at a press conference in Algeciras, southern Spain, last month.

Lisa, originally from Alexandria in Dumbartonshire, vanished on November 4 2015 from her home in Guadiaro near Gibraltar and is presumed dead by Spanish authorities – as well as her family.

Chief suspect Corner went on the run around Christmas after being released from prison on bail.

A spokesman for Scotland Yard said: “A man has been arrested at Heathrow airport on a European Arrest Warrant for conspiracy to murder.

“Simon Corner, 35, was arrested on Monday, 16 April on a flight from South America.

“The arrest was at the request of Spanish authorities.

“He appeared at Westminster Magistrates Court on Tuesday, 17 April.

“He will be sent to Spain within ten days of the above hearing.”

A Spanish judge released Corner on bail in April last year after his April 2016 arrest in Denmark on an international arrest warrant.

The convicted criminal, jailed for three months in Gibraltar in May 2014 for possession of an offensive weapon after a nightclub alteration, fulfilled his bail conditions by signing on at court for several months before disappearing.

He is thought have fled Spain around Christmas-time but was only made the subject of an international arrest warrant in March.

Court officials have confirmed Corner remains under investigation on suspicion of Lisa’s homicide – along with six other Brits suspected of obstruction of justice.

Lisa’s brother Craig Douglas revealed the family’s cash reward during a fresh appeal on March 23 at a hotel near her expat home, attended by Britain’s Ambassador to Spain Simon Manley, representatives of UK charity Crimestoppers and Spanish police.

Lisa’s sister Helen, 51, and her mum Cathy, 73, also attended along with Lisa’s former partner Tony Tomillero, who is now looking after their son at his home in Spain.

Mr Manley, insisting British authorities were working “shoulder to shoulder” with their Spanish counterparts, said: “Few of us can imagine what Lisa’s family have gone through and are going through.

“It’s crucial we uncover information about the disappearance of Lisa Brown and that’s why we are here today.”

Roger Critchell, Crimestoppers Director of Operations, added: “We have offered to help Lisa’s family to facilitate the £100,000 reward.

“The reward relates to finding her whereabouts, anything that assists lawful authorities in their investigations and that may lead to an arrest and conviction.

“Someone knows what happened to Lisa. Maybe more than one person knows.

“Whoever gives us information remains 100 per cent anonymous. We can guarantee that.”

He said the family had provided money for the reward, which has also benefited from a GoFundMe appeal, although no further details were given.

Craig, who like the authorities present said he preferred not to talk about the chief suspect because “today is about the reward” said at the time: “When we started this we had a figure of £100,000 in mind.

“We were very much focused on reaching that target. It’s taken a long time but we’re here.”

Lisa’s older sister Helen Jordan has appealed for information on Simon Corner – who was born Dean Woods but changed his name after run-ins with police – on a Facebook campaign called Find Lisa.

She admitted in a social media post early last month about him alongside a photo: “If anyone is going abroad or stays abroad (Far East is a strong possibility) please keep a look out.

“Normally he has a scouse accent and on his right arm a large cross tattoo.

“Please help us find him and receive justice for our beautiful girl.”

Writing on Mother’s Day she added in a poignant message to her sister: “Mother’s Day has arrived and yet another one you have missed, and we don’t even know where you are.

“We know the door isn’t going to knock anymore or the phone will ring and you’ll be there.

“There are not enough words to explain how much you’re missed every day but more so on special days like today.

“Your Mother’s Day were few but they were filled with so much love and you were a wonderful mum.