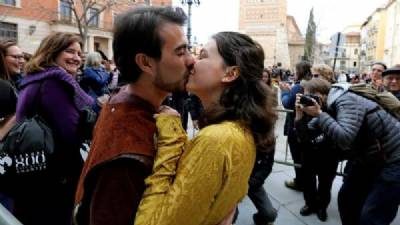 One of Spain’s smallest provincial capital cities has staged the world’s biggest ‘kissathon’ and won its place in the Guinness Book of Records – Teruel, despite only being home to 35,564 people, managed to get 1,015 together on the street for its romantic celebration of its famous ‘lovers’.

Believed to be a true story and among Spain’s most popular folk tales, the ‘lovers of Teruel’ – a couple whose grim fortunes mirror those of Romeo and Juliet – are thought to have died 800 years ago this year and their tombs, with prostrate statues of them on top, lie together in the southern-Aragón city’s mudéjar cathedral.

To mark the eighth centenary of the ill-fated couple, who only came together in death, Teruel sought to bring together couples who have come together in life and join them up together, all kissing at once, in the central Plaza del Seminario to show that – in the words of mayoress Emma Buj – ‘Teruel really is the city of love’.

Until now, the longest ‘kissing chain’ in the world saw 351 couples embracing, but Teruel has managed to almost treble this figure.

The first link in the chain was actor Diego de Marcilla, who played the male half of the famous ‘lovers’ in the film version, with mayoress Emma second, and the final link was the actress who played Isabel in the screen production, Teruel’s ‘Juliet’.

“We wanted to give the legend a happy ending at last, even though it’s taken 800 years for the ‘lovers’ to get together,” Sra Buj said.

A jury member from the Guinness Book of Records, a notary and Teruel’s official chronicler witnessed the event to confirm the feat, which was recorded on camera as additional proof.

Although it looked spontaneous to bystanders, the ‘kissing chain’ was subject to stringent rules to ensure it would win its place in history – among these, every kiss had to be immediate and uninterrupted and all 1,051 at the same time.

No rules covered the gender of the participants, meaning all-male and all-female couples were welcome to join in, even though the original lovers – depicted in the above photograph – were a mixed couple, or would have been if their relationship back in 1218 had not been an impossible dream destined never to come true.