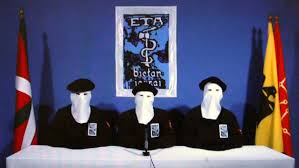 After decades of avoiding responsibility for its victims’ pain, Friday’s statement expresses contrition.

The Spanish government on Friday reacted positively to ETA’s apology to victims of its decades-long terror campaign. “It is good for the terrorist group to apologize to the victims, because the victims, their memory and their dignity were determining factors in ETA’s defeat,” said the executive. “ETA should have apologized sincerely and unconditionally a long time ago.”

The government release added that ETA’s decision to express remorse is a consequence of “the strength of the rule of law,” which defeated the terrorist group “with the weapons of democracy.”

The armed group, which killed over 850 people in five decades of assassinations, kidnappings and extortion, has admitted “the harm caused during the course of its armed trajectory” in a document released on Friday by the Basque news organizations Berria and Gara, which ETA regularly uses to make statements.

The wording of the document is notably different from that of previous ETA statements, which had avoided recognizing the suffering of its victims. This time, ETA admits its “direct responsibility.”

“We are aware that throughout this long period we have caused a lot of pain, including a lot of damage for which there is no solution. We want to show respect for the dead, the wounded and the victims caused by ETA’s actions, to the extent that they were harmed by the conflict. We are truly sorry.”

However, the group also claims that “the suffering was there before the advent of ETA, and it has continued after it abandoned its armed struggle.”

Besides the statement, there is an explanatory note stating that “as part of its debate process, ETA has decided to publish a statement about the harm that was caused. During this debate, ETA militants considered it necessary to show sympathy for the suffering.”

Opposition leader Pedro Sánchez of the Socialist Party (PSOE) tweeted a message to victims of ETA and their families, noting that “it has been a long, tough road.”

We are before a great step towards definitive peace: admission of the terrible harm and pain that was caused. Our heartfelt regards to the victims and their families. It has been a long, tough road.

Victims’ relatives took the statement with cautious optimism, noting that in its statement ETA has only apologized specifically to the victims that it feels “did not participate directly in the conflict.” Basque regional premier Iñigo Urkullu made a similar observation, and asked ETA to show “the same consideration to all victims.”

EU Commission spokesman Margaritis Schinas said the news shows that in the European Union “there is no room for guns and weapons, only for peace and the rule of law.”

In September 2017, ETA opened an internal debate to decide on its own role and the life-cycle of the organization, five months after it staged a decommissioning event under the supervision of an international verification committee. After declaring a permanent ceasefire in 2011, ETA is planning to announce its complete dissolution on the first weekend of May.

The government and Basque parties believe that the formal dissolution could facilitate advances in two issues: self-critical reflection by ETA and the Basque radical left, which is a key factor for the victims; and the transfer of ETA convicts to prisons closer to the Basque Country – a key demand of the group, against Madrid’s policy of scattering them in jails throughout Spanish territory.