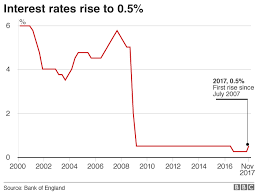 The governor of the Bank of England has said that an interest rate rise is “likely” this year, but any increases will be gradual.

Mark Carney said major decisions had to be taken on Brexit, including on the detail of the implementation period and the shape of a final deal.

There would also be a parliamentary vote on the future relationship between Britain and rest of the EU.

All those events would weigh on how fast interest rates rises would occur.

Following Mr Carney’s comments the pound fell by nearly a cent against the dollar, as markets reacted to the idea that interest rate rises might not be as imminent as some had thought.

The more general performance of the economy, such as on wages, business confidence and inflation, will also be important factors.

“Prepare for a few interest rate rises over the next few years,” he told me.

“I don’t want to get too focused on the precise timing, it is more about the general path.

“The biggest set of economic decisions over the course of the next few years are going to be taken in the Brexit negotiations and whatever deal we end up with.

“And then we will adjust to the impact of those decisions in order to keep the economy on a stable path.”

Mr Carney said that some data on the economy had been “softer” such as on retail sales and that inflation had fallen more rapidly than the Bank forecast in February.

But he said it was important to look through short term volatility and consider the overall momentum of the economy.

“We have had some mixed data,” he said.

“On the softer side some of the business surveys have come off. Retail sales have been a bit softer – we are all aware of the squeeze that is going on in the high street.

“We’ll sit down calmly and look at it all in the round.

“I am sure there will be some differences of view but it is a view we will take in early May [at the next meeting of the Bank’s Monetary Policy Committee], conscious that there are other meetings over the course of this year.”

Many economists and investors in the markets believe that the MPC will vote for a 0.25% rate rise at its May meeting.

But Mr Carney said that although people should be prepared for a possible rate rise this year, there was still a lot of data to consider before they needed to make the decision which will be announced on 10 May.

The strength of global growth would also be taken into consideration.

He said that there was lots of good news on the economy – on jobs, on some wage increases – but there was still significant Brexit uncertainty.

“Most recently it has been the uncertainty around Brexit that has prevented what would otherwise have been a surge in investment in this economy akin to the big pick ups in business investment we have seen in other economies.

“Since the start of 2016 up until now we have seen much less investment than would have expected. Unfortunately that means in the short term that the speed limit is not increasing. Productivity is not increasing, which will limit the rate at which people’s wages can pick up.”

Listening to the governor, I sensed that he was a little more doveish on the possibility of an interest rate rise next month than he had been previously.

It will be a finely balanced decision and the next important statistic to look at will be the three monthly economic growth figure next week.

If that is weaker than expected, then the chances of an interest rate rise before the summer will recede.