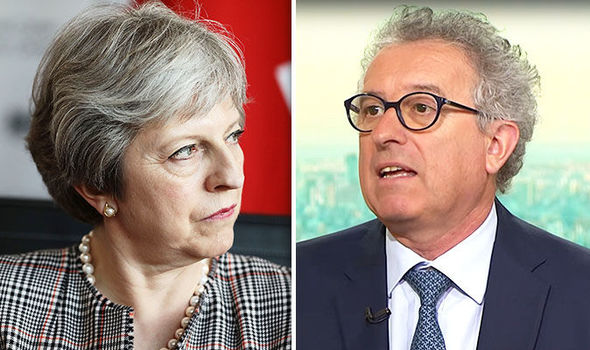 The Brexit deal does not mean the UK can “have its cake and eat it too” warned a Luxembourg minister, after the UK government was defeated on a key piece of legislation in the House of Lords.

The Brexit legislation defeat in the Lords on Wednesday led one Luxembourgish minister to say that if the UK wanted to remain in the customs union then it “cannot have complete independence” when it comes to making its own laws.

Pierre Gramegna, the Finance Minister of Luxembourg told Bloomberg: “It is obvious that the Brexit negotiations have proved extremely difficult for both sides.

“Well obviously everything has a price.

“They have the same rules for the environment, for hygiene, and so on.

“So you cannot have a cake and eat it too.”

In a significant defeat for the Government, the amendment – the first of a series of votes on the EU Withdrawal Bill – could force Prime Minister Theresa May to seek to establish a customs union – like arrangement with the EU to then report back to Parliament.

A cross-party alliance of Lords, including Tory rebels, put forward to the amendment to change the landmark legislation on Wednesday, with the Lords voting 348 to 255 in favour of the amendment.

Mr Gramegna added: “If you want to have the customs union then you cannot have complete independence on your legislation.

“It is about give and take.

“If the UK really wants to do it then I would advocate that the European Union and Commission should take then up on it and work on this.

“But obviously it is the UK that has to make up its mind.”

Despite the amendment’s limited ability to change the Government’s policy, it is likely to reignite the debate over whether Britain is better off inside a newly-negotiated customs union or free to forge its own trade deals.