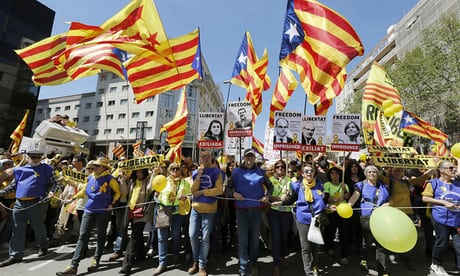 Barcelona-born Valls, opposed to Catalan independence, says he is interested in continuing debate.

France’s former prime minister Manuel Valls is considering standing in Barcelona’s mayoral election next year, as a candidate for the Spanish centre-right Ciudadanos party, it has emerged.

Valls, who was born in Barcelona to a Catalan father and Swiss-Italian mother, has been a vocal critic of the drive for Catalan independence, which is also fiercely opposed by Ciudadanos.

Asked on Friday about the party’s offer for him to represent it in the election, Valls said: “I would be interested in continuing in the debate on independence and I’m going to study it.”

In an interview with the Spanish public broadcaster TVE, Valls said the secessionist movement had stalled, leaving Catalonia a fractured place. “The separatist project has been killed off by the response from King Felipe and Europe, but the [secessionist] ideas will carry on and the process will be a long one because society is very divided,” he said.

Catalan protesters call for return of jailed or exiled leaders

Valls was France’s prime minister between 2014 and 2016. He staged an unsuccessful bid to become the presidential candidate of the French Socialist party at the 2017 election.

The 55-year-old politician has positioned himself as a high-profile opponent of Catalan independence in recent months and took part in a pro-unity rally in Barcelona in March.

Support for Ciudadanos (Citizens) has risen owing to its tough stance during the independence crisis. The party’s regional group, led by Inés Arrimadas, won the most seats and the largest share of the vote in December’s Catalan elections, even though pro-independence parties retained their parliamentary majority.

Polls suggest that Ciudadanos, which was founded 12 years ago, would win a general election in Spain if one were held now, pushing the ruling People’s party (PP) into second place and overturning decades of dominance by the conservative PP and the Spanish Socialist party.