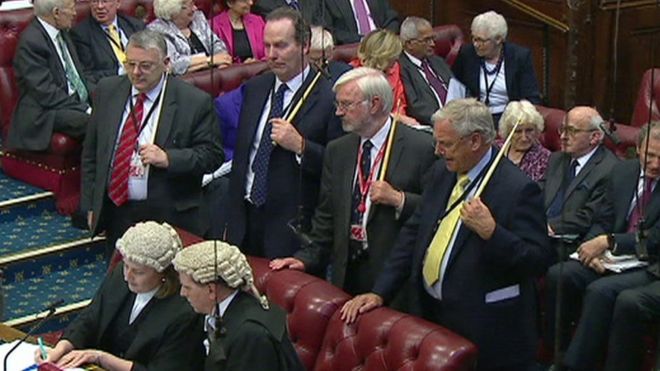 A powerful cross-party group of MPs is to force a vote on a customs union next week in the House of Commons.

The Liaison Committee, made up of Labour, Conservative and SNP committee chairmen, has tabled a debate calling for “an effective customs union”.

Theresa May has pledged to leave the current customs union after Brexit.

Downing Street believes that trying to replicate it when the UK leaves the EU would stop the country from being able to sign its own trade deals.

Laura Kuenssberg: Vote to add to pressure
Ministers suffer first Lords Brexit defeat
Brexit: All you need to know
The news about the Commons vote comes the day after the House of Lords inflicted a defeat on the government over the customs union issue.

The government had hoped to avoid a vote on the issue in the Commons until next month.

But the MPs, including Yvette Cooper, Nicky Morgan, Sarah Wollaston, and Hilary Benn, have secured a debate that will force the issue.

BBC political editor Laura Kuenssberg said that although a vote would not be binding on the government, it will ratchet up the pressure on No 10 to shift its position if the Commons agrees.

Conservative backbencher Anna Soubry said that it would “not be a meaningful vote at all” but the debate would be important.

She said the “crunch question” was whether the government would have sufficient MPs prepared to overturn the Lords amendments to the EU Withdrawal Bill, when it returned to the Commons.

She told BBC Radio 4’s World at One programme the Lords vote had asked the government only to “explore” a customs union.

“There is an increasing number of Conservative MPs… who are worried and now understand the benefits of us having a customs arrangement, not just for the benefit of manufacturers in particular in our country… but also for peace in Northern Ireland.

“I do hope the government will look at the numbers – but look at the strength of the argument – do the right thing and that is not to seek to whip Conservative members of Parliament to take out this eminently sensible and hugely reasonable amendment that the Lords passed last night.”

He said: “There’s a growing view, I think probably a majority view in Parliament now, that it’s in our national interests and economic interests to stay in a customs union with the EU.

“We’ve got a huge manufacturing sector in the UK that needs to be protected, with many goods going over borders many, many times, and we need to protect that.”

Environment Secretary Michael Gove told BBC Radio 4’s Today programme that the government might face a battle in the Commons to overturn the Lords vote.

He said: “It is the case that there are lots of potential future votes – given the arithmetic in the House of Commons, given the fact that we don’t have a majority – which are always going to rely on the persuasive powers of ministers to get colleagues to support the Government.”