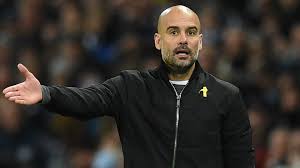 Spanish authorities are facing a backlash after Barcelona supporters were forced to ditch yellow T-shirts ahead of the club’s Spanish Cup final victory over Sevilla.

Several television stations showed pictures of police forcing Barça fans to discard their yellow T-shirts before entering the Wanda Metropolitano stadium in Madrid ahead of the 5-0 thrashing of Sevilla that earned the Catalan club a 30th Copa del Rey victory.

Many Catalans — including Manchester City manager Pep Guardiola whose ribbon has resulted in a fine by English football authorities — have been donning yellow to show support for nine Catalan independence leaders held in prison near Madrid over “rebellion”.

They face up to 30 years in jail if convicted of that charge.

A police spokesman told AFP on Sunday that “placards or T-shirts whose significance or content could have increased the risk of public order problems or violence in and around the stadium were seized”.

Barça have often played a significant role in the Catalan independence movement supported by many of their fans. The club is seen by many as a bastion of resistance against Madrid domination, not just on the football field but in political halls too.

Barça centre-back Gerard Pique has been jeered many times by Spain fans while wearing the national team jersey over his open support for a referendum on Catalan independence.

“Inexplicable. We’re a club that defends freedom of expression,” said Barça chairman Josep Maria Bartomeu after the game, adding that he would demand an explanation from the Spanish Football Federation.

“If now, a simple colour is an offence to the State, where are we going?” former Catalonia president Carles Puigdemont tweeted from Germany where he is in self-imposed exile to avoid a Spanish arrest warrant.

“Banning yellow in a football stadium is absurd and ridiculous, and an unacceptable attack on freedom of expression,” said pro-Catalan independence association Omnium Cultural.

Social media users reacted with irony, asking if the match officials for the cup final would also have their jerseys taken from them as they were wearing yellow.

Some Barcelona fans jeered the Spanish national anthem and the watching King Felipe VI ahead of Saturday’s match.