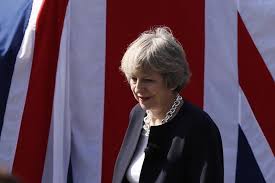 It’s long been known that there is no configuration of free trade deals to be had outside the European Union that comes close to adequately replacing what will be lost in trade by leaving the single market.

Do you find Brexit a kind of slow-burn, psychological thriller box set in which all of humanity’s worst characteristics compete for supremacy? Then stay tuned because we’re approaching a truly climactic episode.

The comparatively benign themes of ignorance and idleness have been having the run of things for a while now, but the conflict between mendacity and outright racism (which is nothing if not honest), has been building almost since day one and its showdown is about to come.

On Sunday, Theresa May made clear she has given up hope of leaving the customs union. We know this for certain, not because it was on the front of The Sunday Times, but because Downing Street later issued a statement denying it.

“Leaving the EU while staying in the customs union is the worst of all worlds,” writes Daniel Hannan, their spirit leader, in The Daily Telegraph. “Worse than full EU membership. That is precisely why some MPs and peers are pushing it.”

But the concentration of this outrage and its ring-fenced nature should finally tell Hannan and his friends the one thing about Brexit they have always been too cowardly to admit, ever since they stoked racist sentiment and won.

It is always worth returning to the elderly gentleman whom Channel 4 News stopped on the streets of Barnsley not long before the 2016 vote took place. “It’s not about trade, or Europe, or anything like that. It’s all about immigration,” he told them. “It’s about stopping Muslims coming into this country. The movement of people in Europe, fair enough. But not from Africa, Syria, Iraq, everywhere else, it’s all wrong.”
This nice salt-of-the-earth chap has every right to these opinions. At the time, Vote Leave, for whom Daniel Hannan was a hugely influential strategist, was stoking up anti-Muslim sentiment, scaremongering about Turkey joining the EU.

That since the referendum, he has liked to tweet things like, “If someone tells you the referendum was all about immigration, you are almost certainly talking to a Remainer,” is a noble attempt to find some way to sleep at night, even if it does involve not reading the replies.
But the reality is much worse than Hannan and co think. It’s long been known that there is no configuration of free trade deals to be had outside the EU that comes close to adequately replacing what will be lost in trade by leaving the single market.

Even if there were, it would involve trade deals with, for example, India, who have made abundantly clear that any free trade deal would require improved UK visa rights for Indian nationals.

And who would have to grant those? That’s right, Theresa May, the very same person who fought to effectively veto an EU/India trade deal necessitating improved visa rights. She was in the middle of driving xenophobic vans round London, showing there were absolutely no limits to which she would not go to bring down immigration.

And who can blame her? Even now, people who are not demonstrably mad try to make the case that the Brexit vote was about a pivot from the EU back to the Commonwealth.

And this is happening in the midst of arguably Theresa May’s biggest humiliation as Prime Minister – the systematic humiliation of elderly ethnic minority British pensioners who were invited here as children.

Of course, the temptation is to blame Theresa May personally for Windrush, and such a course of action would not be wholly unjustified. But it cannot be ignored that democratic politics is subject to market forces. If there were no anti-immigrant sentiment alive and well in Britain today, it is hard to see why, while Theresa May was busy setting up her “hostile environment” , the merchandise section of Ed Miliband’s Labour Party website had “controls on immigration” mugs for sale on it.

There is to be a Commons vote on Thursday over continued membership of the customs union, but given the Conservatives are expected to lose, they have already said they will not take part in it. Indeed, one of the more surrealist emblems of the return of “parliamentary sovereignty” has been the consistent Tory abstention from it.

In advance of the debate, the likes of Sajid Javid have said that the EU referendum gave “clear instructions to politicians” on leaving the customs union. Again, no one doubts the sincerity of Javid’s conviction but that palpably did not happen. Arguably the most reckless aspect of David Cameron’s referendum was that it was designed only for a Remain vote, for everything to remain the same. It offered no contingency for how to proceed through the many pathways of Brexit, no method for any mandate to express itself. But if Javid thinks a Brexit vote was a clear instruction to say no to immigration from Poland, Romania, France, Germany and the rest, and yes to free trade with India and the rest of the commonwealth, and all the extra immigration that will inevitably have to come with it, then it’s worth taking a walk down Barnsley high street.

The process of extracting meaning from mass democratic events, of interpreting “what the public are really saying” is among the most depressing aspects of political analysis. The electorate are saying millions of things, using millions of blunt instruments to arrive at a crude vote. But it nevertheless cannot be ignored that a year ago, Theresa May made clear her negotiating position – leaving the single market, leaving the customs union – and she asked the country to “strengthen my hand in the negotiations with Brussels.”

That request ended with her unable to govern without the backing of a fringe Northern Irish party, who won’t accept any difference in status between Northern Ireland and the rest of the UK, and won’t countenance any return to a hard border either. That is reality.

Really, it was in that moment, at 10pm on 8 June, that the immigration tiger Dan Hannan and the rest rode, the one that truly doesn’t care about free trade and the customs union, jolted them free and bit their head off. They just haven’t realised it yet.