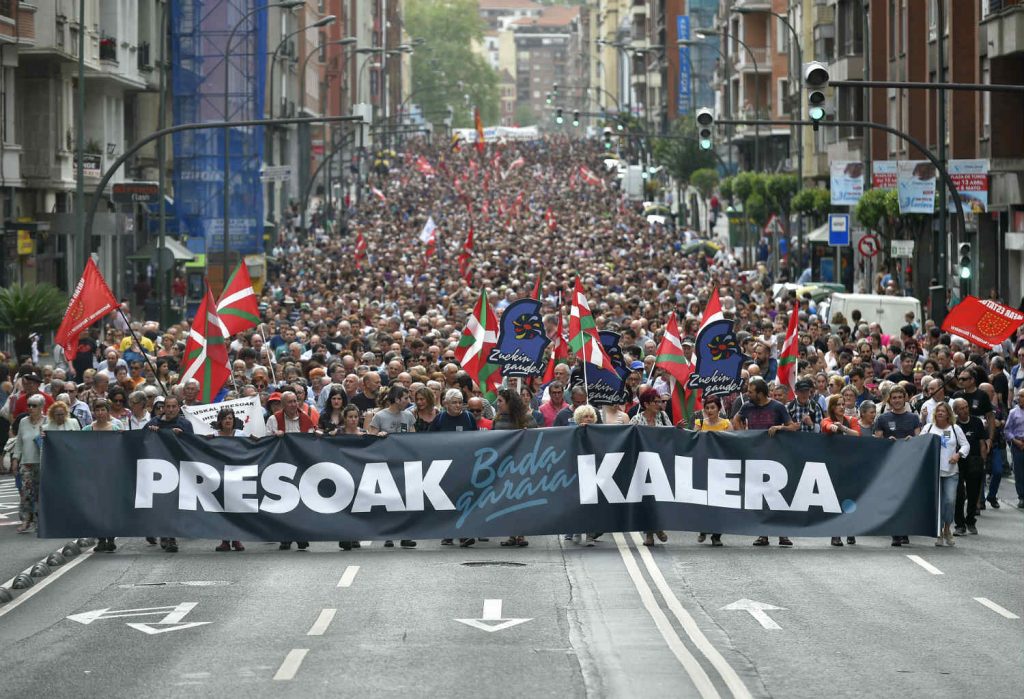 Thousands of protesters took to the streets of Bilbao in northern Spain on Saturday, urging better conditions for jailed members or collaborators of ETA just weeks before the Basque separatist group is due to disband.

Shouting “Basque prisoners home” and waving the red, green and white Basque flag, they called for ETA prisoners to be transferred to jails closer to the northern region from where they are, hundreds of kilometres away, and freedom for those who are ill.

The protest comes a day after ETA apologised to some of its victims for the first time for the “pain” caused by its decades-long campaign of violence for an independent Basque homeland in northern Spain and southern France.

It was the most comprehensive apology yet by the group that killed at least 829 people, which a mediator says is set to announce its dissolution in a historic declaration in early May, nearly seven years after declaring a permanent ceasefire.

While some victims denounced the apology as half-hearted, given it did not extend to those the group considered legitimate targets such as police or politicians, others insisted it was a major step towards reconciliation and healing wounds in the Basque society.

There have been calls for the Spanish government to take a step too by transferring ETA prisoners closer to the Basque Country, rather than keeping most of them in jails hundreds of kilometres away where their sometimes-elderly relatives have trouble visiting them.

This is known as the “dispersal” of prisoners.

A large majority of ETA prisoners are also kept under the strictest “first degree” jail regime which only allows them out in the yard for three to four hours a day and bans them from getting leave.

Under Spanish law, this applies to inmates who are extremely dangerous or who cannot adapt to more lenient prison regimes, and lawyers defending ETA prisoners argue they do not fall under those categories and should be given better conditions.

On its Twitter feed, the pro-independence Basque party Sortu said: “It is urgently necessary to abolish the dispersal, to let sick prisoners go home and to end the first degree (regime).”

The Spanish government, however, has said it will not change its policy towards prisoners linked to a group that also carried out kidnappings and extortion.

Some 300 ETA members are imprisoned in Spain, France and Portugal and up to 100 are still on the run, according to the Social Forum, an association that is close to the families of prisoners.