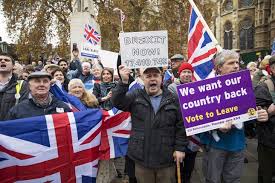 Former Justice Secretary Ken Clarke launched into a tirade criticising pro-Brexit politicians for urging the British Government to leave the single market as part of the withdrawal agreement with the European Union.

Mr Clarke focused his scathing attack on “extreme Brexiteers” calling on the Government to sever all ties with EU institutions because of the Brexit vote.

The former frontbencher claimed that leaving the single market – a key component of Theresa May’s Brexit strategy – had not been part of the EU Referendum vote, suggesting Parliament be given a right to decide on whether to maintain British membership of the institution.

Speaking to BBC Daily Policy, Mr Clarke said: “We mustn’t give in to extreme Brexiteers who seem to have a reaction to each and every European institution or rule from which we benefitted for the last 40 years.

“No one is going against the will of the people. The referendum was not fought on the basis ‘let’s leave the single market.’

“Half the members of Parliament couldn’t have explained to you what the single market was and what the difference was between it and the customs union.”

The former Justice Secretary directly referenced former government colleague Lord Nigel Lawson for his decision to side with the pro-Brexit campaign.

Mr Clarke said: “Nigel was pro-European, I always thought, when I was in government with him.

“His current enthusiasm seems to be joining all these Brexiteers who, like Boris I’m sure, are all delighted to have recruited him. I can’t understand how he is a former Chancellor and has come to this conclusion.

“Most members of the public are getting irritated by this because no one explained to them what we are talking about.

“There has been no amendment in either House of Commons or Lords saying we should stay in the European Union. I voted against Article 50 but no other Conservative did.

“I accept Parliament has bound itself to leave the European Union. What we are talking about is how we leave.”

But the House of Lords delivered a severe defeat to the Government after voting in favour of an amendment to the EU Withdrawal Bill which would force Mrs May to seek to establish a customs union with the EU before looking into other types of trade arrangements with the bloc.

A statement issued by the Department for Exiting the European Union said the ministry was “disappointed” by the vote.

It said: “The fundamental purpose of this Bill is to prepare our statute book for exit day, it is not about the terms of our exit.

“This amendment does not commit the UK to remaining in a customs union with the EU, it requires us to make a statement in Parliament explaining the steps we’ve taken.

“Our policy on this subject is very clear. We are leaving the customs union and will establish a new and ambitions customs arrangement with the EU while forging new trade relationships with our partners around the world.”