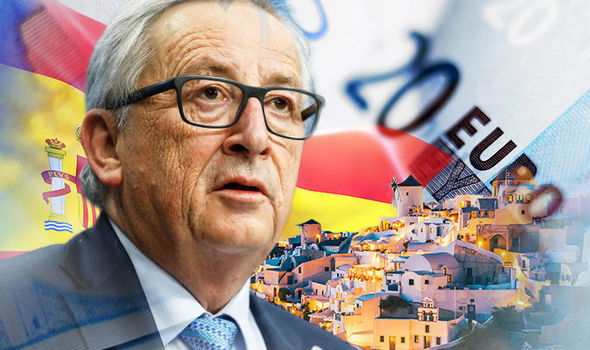 Warsaw and Budapest are expected to lose out on MASSIVE amounts of cash as Brussels proposes to move tens of billions of euros in EU funding away from central and Eastern Europe to the countries worse hit by the financial crisis, such as Spain and Greece.

The aim of the plan is to support the less developed parts of the union as Brussels does not want to continue distributing cash just based on a country’s wealth or GDP (gross domestic product).

Cash given to countries will depend on different criteria such as youth unemployment, education, the environment and innovation.

Poland has warned that tough conditions for EU funding would cause “enormous problems”.

The plan is part of the European Commission’s draft of 2021-27 EU budget, which will be announced in May.

One ambassador in Brussels from an EU member state said to the Financial Times: “They are trying to fix it against us.

“It is another way to lose money”.

Since 2004, the EU’s funding allocation focussed on closing the economic gap between old and new member states.

In March, the French president Emmanuel Macron said: “France is ready for an expansionary budget.”

He has pushed for the next EU budget to have more of its own resource like a revenue tax on internet giants.

In February he said: “I will oppose a European budget that would help finance social, fiscal divergence or differences on values”.

The responsibility for allocating the budget lies with the Commission and national governments manage about 80 per cent of EU funds.

Juncker has called on EU countries to make up the Brexit hole of £11 billion – a- year after the UK leaves the bloc.