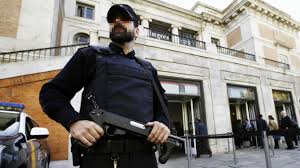 THE husband of one of Europe’s most dangerous and hunted ISIS terrorists has been arrested in Málaga for financing her trip to Syria, National Police say.

Fadoua Hassad, 36, originally from Morocco is said to be ‘extremely radical’ and has made constant references to staging attacks in Spain.

She has been actively involved in recruiting women to the self-styled ‘Islamic State’, also known as DAESH, from the war-torn Middle Eastern country.

Her ex-husband, 35, also Moroccan and legally resident in the Costa del Sol capital, reportedly gave her money in instalments to help her get to Syria and join DAESH.

Police have been investigating the couple since February 2016 when it was found she had left Spain on a flight to Greece before catching a connection to Turkey.

The arrested man sent her money to Turkey and also Italy, and supported her plans to join DAESH in the company of another Jihad terrorist – a 25-year-old Palestinian man – said to be extremely dangerous and whom she had met online.

In total, in the last two years, Fadoua has received over €6,000 and had also sent large amounts of money to the Palestinian’s family, as well as funding his movements across Europe from her ex-husband’s contributions.

The husband is said to have been aware of Fadoua’s new relationship and, despite only earning a relatively low wage, managed to send her at least €700 a month between February and June 2016.

She is said to have returned to Málaga in July of that year, but four months later went back to Turkey and took steps to cover her tracks – travelling overland to France and then Italy, Greece and the province of Hatay in Turkey which borders Syria and various DAESH and Al-Nushra strongholds.

The arrested man, charged with financing terrorism, claimed he did not know where his wife was when he sent her money and that he was only doing so to cover her living costs as she was not earning, but the prosecution considers he was fully aware of her intention of becoming a ‘foreign fighter’.

Once in DAESH-controlled territory, Fadoua entered in combat, something which only the most active and dangerous women are allowed to do.

Meanwhile, she carried on with her online recruitment, targeting young girls and trying to convince them that Jihad was ‘the only way’ for a ‘good Muslim’.

Spain’s National Intelligence Centre had her listed, and Europol has been searching for her.

Both agencies coordinated searches on two premises, one of them being the ex-husband’s Málaga home.