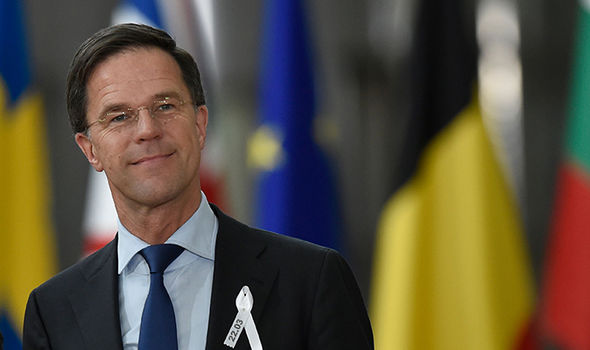 The EU is ready to put the financial screws on taxpayers throughout the bloc by levying BILLIONS in extra revenue in a bid to plug the gap the UK will leave behind after Brexit – with several countries unhappy at the proposal.

Brussels will signal an intention to play hardball next week when Commissioner Günther Oettinger publishes his proposal for the EU’s next long-term budget, which is due to come into force in 2021 and will run for six years.

The last EU budget was set against a backdrop of austerity in 2012, with the UK arguing strongly that contributions should be low.

However, this time the two countries at the heart of the bloc – France and Germany – have indicated they are keep to open up the purse strings, sounding alarm bells among countries which are less keen to do so, such as Austria, Denmark, the Netherlands and Sweden.

Dutch Prime Minister Mark Rutte indicated his opposition to the idea of paying in more cash during a speech in Berlin last month.

He said: “My goal for the multi-annual budget is this: no increase in contributions, but better results within a smaller budget.”

Britain currently pays roughly £13billion into EU coffers every year, revenue which Mr Oettinger will be aware he can no longer count on after the UK quits the EU next year.

The EU’s current budget, known as the Multi-annual Financial Framework (MFF), totals just over £876billion, equivalent to one per cent of its total gross national income.

Mr Oettinger wants to raise this proportion to a figure he refers to as “1.1x” – somewhere above 1.1 percent, representing a ten percent rise on the current proportion which will amount to billions of euros.

He believes roughly half of the Brexit budget gap needs to come increased contributions from member states and half from cuts.

Furthermore Mr Oettinger has proposed that new spending — estimated at €100 billion — needs to be covered with 80 percent from “fresh money” and 20 percent from restructuring (meaning cuts).

Referring to resistance to increased budget contributions last time around, an EU official was quoted by the Politico website as saying: “Where is that alliance now? The U.K. is gone. Germany are prepared to pay more. France, clearly on the same line.

“I think it is clear to everybody that everybody will have to pay more.”

With several EU economics running budgetary surpluses, EU chiefs have calculated the time is right to pay more into the central pot.

French President Emmanuel Macron told the European Parliament last week: “We must not deny any ambition of existing policies, but we must add the new ambitions we carry.
“France is ready to increase its contribution.”

The EU faces many months of wrangling prior to the final ratification the budget, with debates to come over how and where to spend the money, whether or not to cut agricultural subsidies, as well as likely warnings to countries identified as being in defiance of EU rules and standards – specifically Poland and Hungary.

While the European Commission, which is essentially the bloc’s “government” in so far as it has one, makes the initial budget proposal, and the European Parliament must vote its approval, its implementation still rests on a unanimous agreement of the leaders of the European Council.

All 27 of them will be fighting for the best possible deal for their own country, and will have to be able to “sell” it domestically.

The last budget took two years to agree – and that was without Brexit clouding the issue.