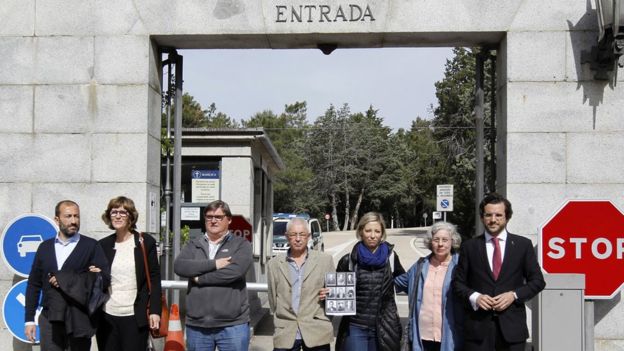 Work has begun on exhuming the bodies of four men killed in the Spanish Civil War from the controversial Valley of the Fallen monument near Madrid.

Tens of thousands of unidentified civil war victims are buried at the site, alongside former dictator Gen Franco.

After a long legal battle, the remains are being removed from the mausoleum at the request of the men’s families.

The site is a shrine for Spain’s far right, who gather there to pay homage to Gen Francisco Franco.

The monument was constructed by the right-wing dictator, who ruled Spain from 1939 until his death in 1975.

Victims from both sides of the 1936-39 civil war are interred there. However, the site is controversial for many Spaniards, as it is seen as a place dedicated to the victory of Gen Franco’s nationalist forces over their Republican opponents.

The bodies of Gen Franco and the founder of Spain’s fascist Falange party, José Antonio Primo de Rivera, are buried at the site.

Dogs from Spain’s Civil Guard police force are being used to find the bodies of Republican brothers Manuel and Antonio Lapeña as well as those of nationalist soldiers Juan González Moreno and Pedro Gil Calonge.

The bodies of the Lapeña brothers – who were executed by Franco’s forces in 1936 – were dumped in a mass grave in north-eastern Spain during the conflict.

Like González Moreno and Gil Calonga, the bodies of the Lapeñas were later moved and reburied in the Valley of the Fallen without their families’ permission.

Relatives of the men tried to enter the site on Monday but were refused access by the authorities.

Purificación Lapeña, granddaughter of Manuel, said the start of the exhumations marked a “historic day”. “I don’t think they will be unable to get in, either – with today’s technology you can do anything,” she said.

Republican prisoners who had fought against Gen Franco’s nationalist troops during the conflict were forced to work on the construction of the Valley of the Fallen monument, some 50km (31 miles) north of Spain’s capital, Madrid.