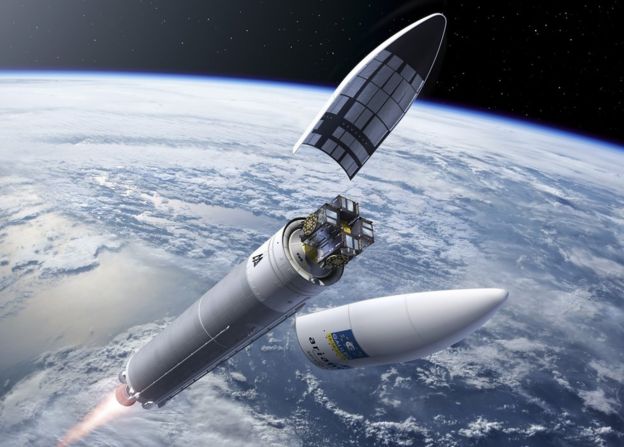 The UK is considering plans to launch a satellite-navigation system as a rival to the EU’s Galileo project.

The move comes after the UK was told it would be shut out of key elements of the programme after Brexit.

The UK has spent 1.4bn euros (£1.2bn) on Galileo, which is meant to be Europe’s answer to the US GPS system.

Business Secretary Greg Clark is taking legal advice on whether the UK can reclaim the cash, according to the Financial Times.

He told BBC News: “The UK’s preference is to remain in Galileo as part of a strong security partnership with Europe.

“If Galileo no longer meets our security requirements and UK industry cannot compete on a fair basis, it is logical to look at alternatives.”

The row centres around whether the UK can continue to be trusted with the EU’s most sensitive security information after Brexit.

The UK’s armed forces were planning to use Galileo to supplement their use of the US GPS system, but press reports suggest they will now be blocked from doing so. The US retains the more accurate and robust GPS signals for its own armed forces.

Graham Turnock, chief executive of the UK Space Agency, said early feasibility work was under way into a UK system, which he said would cost a “lot less” than Galileo, thanks to work already done and “British know-how and ingenuity”.

Asked by the BBC’s Science Correspondent Jonathan Amos if it could be as much as £5bn, he said “tops”.

And he warned that excluding the UK from Galileo could set the European programme back years and cost the EU billions more in development costs.

“We still think there is a ‘win win’ to be had here if the European Commission and the EU 27 change their minds.

“But at the moment they appear to be set on excluding the UK from industrial participation in the programme.”

He said the UK had “a lot of the capability that would be needed for a sat-nav system because we developed them as part of our role in Galileo”.

“We cannot launch yet, although obviously we are trying to address that, but this is something we think is in the realm of the credible,” he added.

The pan-European aerospace giant Airbus has been a major player in Galileo’s development. And in the UK, Airbus currently controls the satellites in the sky – satellites that were also assembled by its subsidiary Surrey Satellite Technology Ltd in Guildford.

While Airbus will be able to continue working on Galileo at its continental centres whatever the outcome of the present row, the company said its UK wing stood ready to assist in building a British sat-nav system if asked.

“If the UK opts for its own satellite-navigation system then Airbus’s space operations in the UK has the skills and expertise to lead the development of it,” Andrew Stroomer, a senior British executive in Airbus, told the BBC.

Greg Clark warned that the European Commission’s actions could threaten defence and security co-operation with Britain after it has left the EU.

He is understood to be preparing to block the procurement of the next batch of Galileo satellites at a meeting of the European Space Agency council in Berlin, as part of a fightback against the EU decision.

“We’ve been clear that we do not accept the Commission’s position and have called for a three-month procurement freeze and a clear commitment from the Commission that UK industry continues to be eligible to apply for all Galileo contracts on a fair and open basis,” said the business secretary.

Officials are also looking into whether the UK could refuse the EU access to ground stations in two British overseas territories – the Falkland Islands and the Ascension Islands.