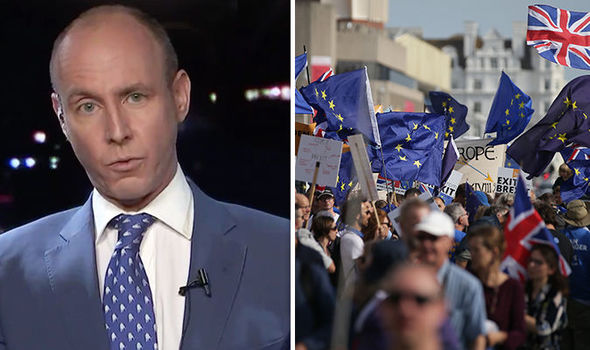 The staunch Brexiteer hit back at calls for Britain to remain the EU’s customs union after Brexit, which was pushed forward by an amendment to the EU Withdrawal Bill in the House of Lords last week.

Speaking on BBC News, Mr Hannan said: “I just want to make this one point about the customs union. A lot of people think it is a kind of compromise, a halfway house.

“You’ve heard me say before there should have been compromised. It was a narrow vote.

“We should be looking at which EU programmes we remain in, whether we have continued right to take up jobs, whether you have membership of EFTA. But the customs union is not like that.

The British MEP agreed he would rather remain in the EU than remain solely in the EU’s custom union, which would prevent Britain from striking trade deals across the globe – one of the main pledges of Vote Leave.

He added: “Because no other country, the only country in that situation, partially, is Turkey and they hate it and they are always moaning about it. they only agreed to do it as a step to membership.

“Why are we asking for a worse deal than Norway has and Switzerland? The answer is because people want it to be a bad deal because they see that as a way of reversing the result.”

Peers defeated the Government last week after voting for an amendment to the EU Withdrawal Bill in hope of keeping Britain in the EU’s customs union.

A cross-party alliance of Lords, including Tory rebels, put forward to an amendment to the Government’s EU Withdrawal Bill and voted by 348 to 225 in favour of changing the landmark legislation.

A statement issued by the Department for Exiting the European Union said the ministry was “disappointed” by the vote.

A similar vote is also expected in the House of Commons on Thursday.

Prime Minister Theresa May has previously insisted that the UK will leave the common tariff area so it can pursue free trade deals outside the EU.

Brexit Secretary David Davis rejected the idea of remaining in the EU’s customs union if there was no deal on new customs arrangements – insisting he would be a “failure” if Britain remains in the EU agreement.

Mr Davis warned the EU is at risk if no deal is made on customs arrangements before the transition period it over. He said: “The bigger risk from that point of view is the other way, is what the French customs authorities, the Dutch and others and we are talking to them already to try and facilitate that.

“But no, I do not expect the solution to that to be an extension of membership of the customs union. I would view that on my part as a failure.”