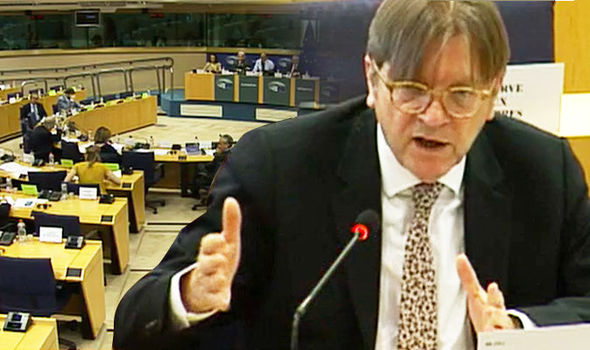 The Irish border question has plagued Brexit negotiations with either side making substantial progress, with many EU leaders using the unresolved issue against the British negotiators.

Mr Verhofstadt was updating MEPs on the constitutional affairs committee on Brexit, when he once again affirmed Parliament would not give consent to any deal unless an answer is found to the Irish border question.

Last December, Brussels and Westminster agreed a deal to conclude Phase One of negotiations with Theresa May promising to avoid a hard border in Ireland.

A backstop has been included in the draft withdrawal bill by Brussels, which would mean Northern Ireland remains in the customs union after Brexit, if the Prime Minister fails to deliver on her promise.

Mr Verhofstadt, chairman of the Brexit Steering Group, told MEPs: “We have made it clear from day one, perfectly clear, that the European Parliament will not give our consent without a guarantee, 100 percent assurance, that there will be no hard border.”

The former Belgian prime minister added: “There is a solution for Ireland because there is a backstop.

“The reason for the backstop is if there is no other satisfactory solution found with the UK or the UK doesn’t come forward with a common sense solution then we have Britain’s assurance the backstop will be put in place.

“That is an enormous step forward we have made in March compared to the situation in December.”

An EU summit in June is expected for all parties to agree on a solution to the Irish border and the wording of the backstop mechanism to be included into any withdrawal deal.

Mr Verhofstadt was, however, optimistic that the withdrawal agreement will be concluded in the near future, stating 80 percent of the UK’s departure is now agreed.

He said: ‘That is a success so far, but the last 20 percent are obviously the most difficult bits.”

The transition period, which will see the UK remain an EU member in all but name, running till December 2020, could be up for further discussion, according to Mr Verhofstadt.

He declared the EU could be a “little bit flexible” about the exact dates, meaning a shorter or even lengthened transition period for the UK.

Mr Verhofstadt said: “If we’re in the last discussions of negotiation, it will always be possible to be a little bit flexible about December 2020.”

He remained diplomatic while discussing the UK Home Office’s post-Brexit registration application for EU citizens wishing to remain in the country.

While hosting a meeting with British officials, Mr Verhofstadt and MEPs discovered a residency app will not work on iPhone devices.

Home Office officials admit the smartphone application will only fully work on Android devices, while the department declared it only one of several methods for EU citizens to register their settled status in the UK.

He and other MEPs will be writing a letter to UK authorities outlining a number of concerns and potential recommendations to resolve their criticisms.