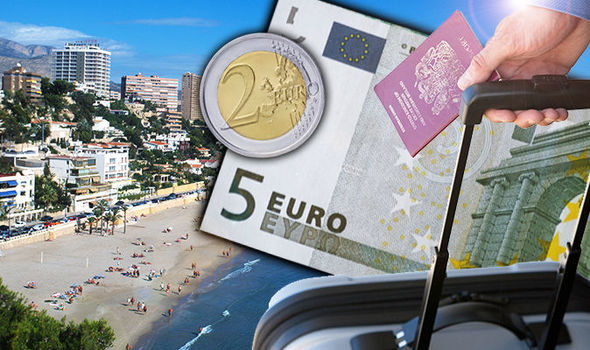 EUROPEAN UNION ambassadors announced “another important step in protecting the EU’s external borders” but it could mean Britons would have to pay €7 to submit a “travel authorisation” application before travelling to the Continent on holiday.

With the UK heading for life as a ‘third country’ and ditch the EU’s freedom of movement policies, British tourists hoping to travel to Spain, Italy or other destinations within the bloc will likely be charged for the pleasure.

An agreement was reached by the Bulgarian Council presidency and European Parliament representatives for the European travel information and authorisation system (ETIAS).

“By knowing who is coming to the EU before they even arrive at the border, we will be better able to stop those who may pose a threat to our citizens.”

The announcement means, unless an agreement is reached with Brussels, Britons would have to pay for each ETIAS application before they journey.

The EU announcement reads: “ETIAS will allow for advance checks and, if necessary, deny travel authorisation to visa-exempt third-country nationals travelling to the Schengen area.”

They add the scheme hopes to reduce border delays and improve internal security.

Each travel authorisation will last for three years and will provide details to border guards, who can still deny entry.

Brussels says “the system will apply to visa-exempt third country nationals”, which Britons are set to become as of March 29, 2019, according to the EU’s agreed Brexit negotiating guidelines.

For each application, travellers will have to pay a pre-authorisation fee of €7 to submit the application to the Brussels authorities.

Details will then be cross-referenced between EU and Interpol databases to determine whether there are grounds to refuse authorisation to EU countries.

This will not apply to members of the European Economic Area – Iceland, Liechtenstein and Norway – or other EU countries.

The new proposal will now be voted on in European Parliament before being sent to the Council for adoption.

The Commission’s chief Brexit negotiator Michel Barnier has said he wants a post-Brexit deal which includes “foreign, security and defence policy”, meaning Britons may still be unaffected by the proposals if an agreement is reached.

Prime Minister Theresa May has also spoke of eradicating potential bureaucratic trouble for travellers, but as a “labour mobility framework” helping UK businesses and self-employed professionals to trade to the EU uninterrupted.