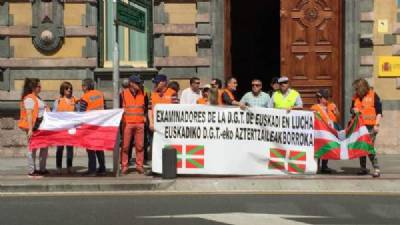 DRIVING EXAMINERS have threatened to resume their strike unless they get the pay rise of €250 a month they have requested from the national government.

Industrial action last year saw examiners downing tools three days a week between June and December inclusive, leading to literally hundreds of thousands of driving tests being cancelled or shelved and driving schools forced out of business as pupils decided there was little point in carrying on with their lessons if they had no idea when they might have a chance at getting their licences.

The average first-time fail rate in Spain is around 73%, meaning demand for tests is high as the nearly three-quarters of candidates who do not pass their initial driving test are keen to book another as soon as possible.

An agreement by the opposition parties in government, who are in the majority, to back the examiners’ pay-rise request if they managed to get it through to a Parliamentary vote.

Examiners have been asking for the extra €250 for the last decade, since they consider it unfair that they are paid the same as office-based staff when they face additional risks, and with long-running staff shortages due to cutbacks, often have to double up their shifts.

But now the draft annual budget has been released, the extra pay has not been included, complains Ángela Arias, spokeswoman for the Association of Traffic Examiners (ASEXTRA).

If an amendment to the budget does not go through – which ASEXTRA members expect to hear about by mid-May – they will resume strike action, Sra Arias says.

“We’re staging these protests to remind them that we’re still here, so the public does not think we’ve gone quiet because they’ve given us what we’ve been asking for,” she says.

Opposition parties, especially the more left-leaning, are likely to vote for the budget amendment – Unidos Podemos’ MP Jorge Luis Bail has said his team will do so as it will consider further strike action by driving examiners as ‘the inevitable result of the government’s inaction’ – although a deal struck with the Basque National Party (PNV) over increasing State pensions means its members have agreed not to back any budget amendments; also, centre-right Ciudadanos could go either way with its own vote, potentially leaving examiners’ pay increase in the lap of the gods.

Meanwhile, in an attempt to resolve the conflict amid national driving-test chaos, the General Directorate of Traffic (DGT) opened up 435 promotion opportunities for examiners, which 97% of ASEXTRA members applied for, and which gave successful candidates an automatic salary increase of €126 a month.

But this is only half the amount they are asking for, and the 97% quoted is actually only 60% of the examiner community.

Examiners at level C2 were given the opportunity to apply for a C1 role, but the 40% who were already at grade C1 did not get a raise as they were unable to climb the corporate ladder any further, ASEXTRA explains.

Another 70 examiner vacancies will be opened this coming Sunday, May 6 to help reduce existing testers’ ever-increasing workload.

The most recent examiner protest was on Saturday in the province of Vizcaya, or Biscay (Basque Country), as shown in the above photograph, taken by ASEXTRA.

Another is due to take place in a fortnight, but the location has not been confirmed.