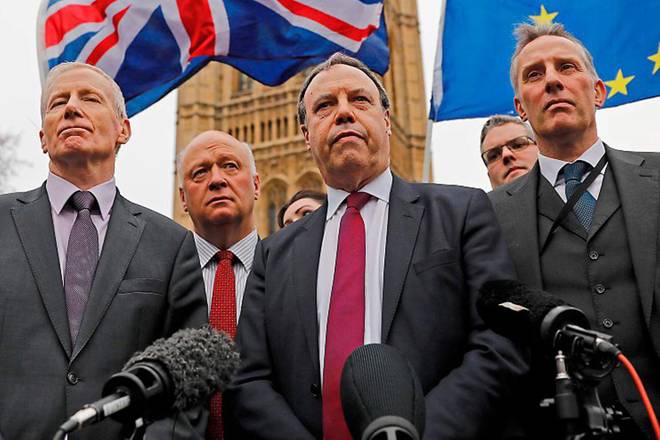 A senior DUP MP today warned Theresa May that his party is prepared to bring down the Government rather than see Northern Ireland fracture away from Britain.

Nigel Dodds, leader of the Democratic Unionist Party at Westminster, said his party would enforce its “red line” that Brexit must not lead to a rift between Northern Ireland and the rest of the UK.

EU leaders are pushing for the province to effectively remain in the customs union and single market if the Government fails to come up with a solution to avoid a hard border between Northern Ireland and the Republic.
Mr Dodds said: “If, as a result of the Brexit negotiations for instance, there was to be any suggestion that Northern Ireland would be treated differently in a way, for instance that we were part of a customs union and a single market and the rest of the UK wasn’t … for us that would be a red line, which we would vote against the Government.”

Speaking to the Conservativehome website, he added: “You might as well have a Corbyn government pursuing openly its anti-Unionist policies as have a Conservative Government doing it by a different means.”

Giving evidence to MPs today, Brexit Secretary David Davis gave no indication that any breakthrough is imminent in the stalemate over the Irish border.

He was giving evidence to the Brexit committee before a Cabinet-level meeting to discuss technological issues relating to the departure from the EU.

In a sign of the tensions over the Irish border impasse, Mr Dodds accused the Irish government of using “very aggressive terms”.

He added: “They’ve talked about almost the annexation of Northern Ireland.”

He also made clear that the DUP is strongly opposed to Labour leader Jeremy Corbyn.

“One of the reasons why we entered into the confidence and supply agreement was to keep Corbyn out of No 10, to avoid an early general election,” he said. “Corbyn being in No 10 would be a disaster not just for Northern Ireland but for the UK, and actually dangerous for the UK in every sense.”

The Government has suffered defeats on its Brexit plans in the Lords, with peers seeking to force remaining in a customs union back on the agenda.

But the EU is not holding its breath on the issue. EU Brexit coordinator Guy Verhofstadt said today: “We are not working […] on the idea, ‘Oh maybe they will change their mind, and if they change their mind, what are we gonna do?’”

Mr Verhofstadt also warned the UK to propose a solution for the Irish border by June, and not October, a date floated by Mr Davis.

“It’s clear that the ball is now on the side of the UK to come forward with a satisfactory solution” he said.

“We will not give our consent to a withdrawal agreement without a guarantee, a 100 per cent assurance, that there will be no hard border between Northern Ireland and the Irish Republic.”

EU foreign affairs chief Federica Mogherini launched a veiled attack on British, US and French action in Syria, saying a political solution was “the only objective” it backed, adding: “Military activities are not opening the way.”