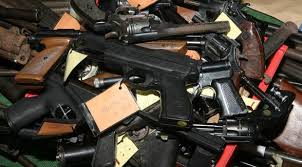 Basque separatist group ETA has handed over several cases of weapons and munitions to French authorities as a confidence-building measure ahead of its expected disbanding, a French prosecutor said Wednesday.

Bayonne prosecutor Samuel Vuelta Simon said he had received a tip-off that “a quantity of arms” belonging to ETA had been retrieved by police after being dropped at a location in the south of the French Basque city.

The announcement comes days before ETA is expected to announce its dissolution, definitively ending its nearly four-decade campaign of bombings and shootings for an independent Basque state in northern Spain and southwest France.

Last week it asked forgiveness from its victims for the “pain” caused by its campaign.

Created in 1959 at the height of Francisco Franco’s dictatorship ETA is blamed for killing at least 829 people before it announced a permanent ceasefire in 2011.