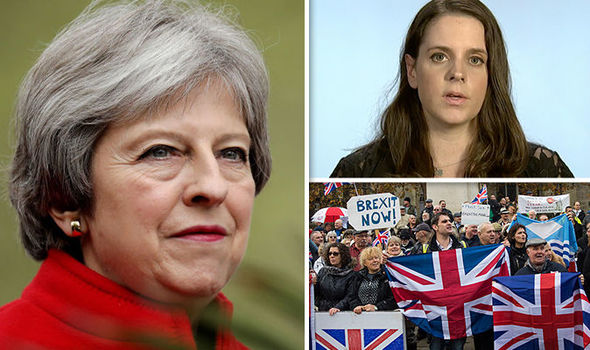 BREXIT BRITAIN could adopt a Turkey-style arrangement when it cuts ties with the European Union, trade expert Allie Renison has claimed.

The Institute of Directors (IoD), a business trade body, has claimed the UK could adopt a Brexit agreement similar to that of Turkey when cutting ties with Brussels.

Doing so would mean the UK would have a “partial customs union in conjunction with a wider trade agreement”.

Allie Renison, Head of Trade Policy at the IoD claimed this would allow the UK to still strike trade deals with the rest of the world, pleasing Brexiteers.
Speaking on Sky News, Ms Renison said: “We know the UK is leaving the EU’s customs union, that is a function of the EU’s treaties and they fall away when we leave the EU. I think that is beyond doubt at this stage.

“What the EU’s customs union does is stop the UK from negotiating its own trade agreements.

“What the IOD has suggested, is to be able to negotiate its own trade agreements but also to minimise the cost to manufacturing in particular, is suggested a partial customs union in conjunction with a wider trade agreement for the areas that wouldn’t be covered, focusing predominately on industrial goods because that create a huge solution for manufacturing.

“It wouldn’t be the silver bullet, I think people have to be clear a customs union alone, whether full or partial wouldn’t solve the Irish border on its own, but its one of the many important pieces in the puzzle.”

The host stepped in suggesting the proposal was very much like “cake and eat it”.
We know the UK is leaving the EU’s customs union…that is beyond doubt at this stage

Ms Renison replied: “No not necessarily, because there is one in existence in terms of having a partial customs union, Turkey has a customs union arrangement with the EU’s customs union.

“There are currently ways being explored to upgrade and modernise it to give Turkey a bit more input into the areas, for example, when the EU negotiates trade agreements, to make sure the tariffs are met on industrial goods, they get access to the other countries markets as well.

“It certainly does exist as a precedent for a partial and limited customs union.”

The comments come as the Brexit Secretary answered questions in the Exiting the European Union Committee about Britain’s future relationship with the EU.
Mr Davis was also asked would happen if the Government was defeated in a vote over its plans to leave the customs union, an amendment pushed forward by the House of Lords this week.

He replied: “I’m not going to enter into hypotheticals. I expect the Government’s policy to be upheld.

“The Government always respects Parliament but I expect the Government’s position to be upheld.”