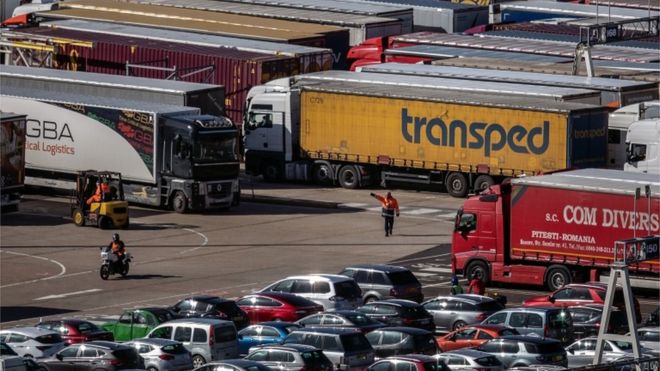 Home Secretary Amber Rudd has appeared to cast doubt on the government’s policy of not being in a customs union with the EU after Brexit.

She told journalists she would not be “drawn” on the issue and said there were discussions to be had about it in cabinet to agree a “final position”.

Later she tweeted that she “should have been clearer” but had not wanted to get into “ongoing cabinet discussions”.

The PM Theresa May has ruled out being in an EU customs union after Brexit.

The comments came on the day Ms Rudd faced fresh calls to resign over her handling of the Windrush scandal, which has seen relatives of people from Caribbean countries who settled in the UK decades ago being declared illegal immigrants, if they could not prove they had lived continuously in the UK.

She was forced to admit in the House of Commons that immigration removal targets had existed, a day after telling a committee of MPs that there weren’t any.

She replied: “I’m not going to be drawn on that. We still have a few discussions to be had in a really positive, consensual and easy way among some of my cabinet colleagues in order to arrive at a final position.”

Labour’s Sir Keir Starmer said: “Amber Rudd appears to have let slip that discussions around the cabinet table about negotiating a customs union with the EU have not in fact concluded.

“If that is so, then the prime minister should rethink her approach and listen to the growing chorus of voices in Parliament and in the businesses community that believe she has got it wrong on a customs union.”

The prime minister is under pressure from both sides of the EU debate on the issue of the customs union, which allows for goods to be transported tariff-free between EU member states.

The Financial Times reports that Mrs May is expected to try to secure agreement on an alternative to the customs union, in a Brexit cabinet committee meeting next week.

Ministers were defeated on the issue in the House of Lords last week and the government faces key votes in the Commons next month.

On Thursday, the prime minister’s spokesman said: “The government is clear we are leaving the customs union and not joining a customs union.”

Brexiteers have criticised a suggested “customs partnership” to replace the current arrangements, while pro-EU campaigners say a customs union is the only way to prevent a hard border in Northern Ireland.

MPs debated a non-binding motion on Thursday calling on the government to include in its negotiating objectives with the EU “the establishment of an effective customs union between the two territories”.

With few pro-Brexit MPs attending the debate, the motion was approved without a vote, prompting Labour’s Chris Leslie to suggest it “was now the default consensus view of this House” and said the government should respond.

Crunch votes are expected next month when Remain-supporting MPs will push for a change of course.

A customs union is when countries agree to apply the same taxes on imports to goods from outside the union.

This means when goods have cleared customs in one country, they can be shipped to others in the union without further tariffs being imposed.

If the UK remains part of the customs union, it would be unable to strike trade deals with countries around the world, but supporters say it would help keep an open border between Ireland and Northern Ireland.

During the debate, Labour’s Yvette Cooper said the UK exported more than £230bn of goods and services to the EU every year and warned that to “rip up” existing trade arrangements would be “deeply damaging”.

She argued that existing trade deals should be “cherished” as it was becoming harder to negotiate new ones “as communities across different individual countries become more worried about both the losers and the winners of big changes to trade arrangements”.

Pro-European Conservative Ken Clarke told MPs: “You will damage the economy of this country… if you suddenly decide to erect new barriers at the border between the UK and our major trading partners.”

And former Conservative cabinet minister Nicky Morgan warned: “If we undermine and ignore the evidence for peace in Northern Ireland, and we undermine the business and financial security of the people in this country, we will not be forgiven for a generation.”

Labour MP Kate Hoey, one of the few Brexiteers at the debate, said she felt “alone” in the chamber: “There are a lot of people here today who are using the issue of the customs union to start the process again of wanting to stay in the European Union.”

She argued that if the UK stayed in the customs union, it would be a “transition” to remaining, and would not allow Britain to “take back control” of its trade.

Labour leader Jeremy Corbyn has backed a customs union, but only if the UK had a say in future EU trade deals.

Mrs May has ruled out joining a customs union but has come up with two options to avoid a hard border in Ireland.

One of them is a “customs partnership” that would involve the UK collecting the EU’s tariffs on goods coming from other countries on the EU’s behalf.

If those goods didn’t leave the UK and UK tariffs were lower, companies could then claim back the difference.

This option has been heavily criticised by some Brexiteers, with influential backbench Tory MP Jacob Rees-Mogg branding it “completely cretinous”.

The other option being proposed by the government would be to minimise checks rather than getting rid of them altogether, by using new technologies and putting in place a trusted trader scheme.