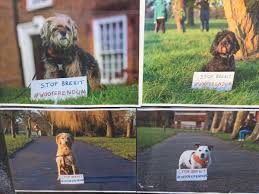 Dogs have started their very own Wooferendum and it seems they are barking out against Brexit. Posters showing the animals posing next to signs saying ‘Stop Brexit #Wooferendum’ have been spotted all over London.

Fronting the campaign is seven-year-old terrier Lily, who has a ‘bone to pick with Brexit’. ‘Lily’ said: ‘To think that my friends – the French poodles, German shepherds and Italian greyhounds and others at the park – might not be able to come and play any more makes me want to howl. ‘What have they done to have their rights taken away? It’s ruff, and almost every mutt I meet wants Brexit to go walkies.’

The page added that thousands of canines all over the country have started the world’s first dog referendum. ‘Lily’ added: ‘No one told us the full implications of Brexit, and how much it will hound all our futures. We want to howl on behalf of the millions of people in the UK who believe Brexit is barking mad.’ Photos of the dogs involved have been put up at bus stops, cafes and pubs across London from Hampstead to Bethnal Green. A Twitter page told followers: ‘Wooferendum dogs will help show that the nation is fighting back against Brexit.’