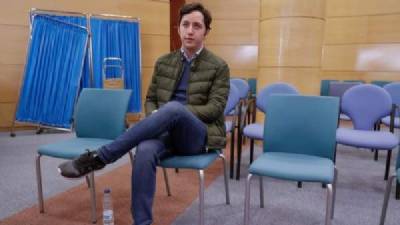 A LAW student who claimed to be a secret agent, managing to infiltrate King Felipe VI’s coronation and claiming he was helping the monarch’s younger sister over her husband’s embezzlement and money-laundering case is facing a €5,400 fine for libel.

Francisco Nicolás Gómez, now 23, claimed Spain’s National Intelligence Centre (CNI) had tapped his phone and was spying on him.

The Madrid student, dubbed by the media as ‘Little Nicolás’, has apologised in court and blamed it on a personality disorder.

A psychiatric report found that he suffered ‘grandiose delusions’ and ‘florid megalomaniac delirium’, and that he had difficulty telling reality from his own fiction.

No formal diagnosis has been made, but the symptoms described overlap with several personality disorders.

Schizotypal Personality Disorder involves delusions or mild psychosis, but not as severe as the hallucinations which come with schizophrenia; whilst what was formally known as Paranoid Personality Disorder and is now called Delusional Disorder would account for his feelings of persecution by the CNI.

Additionally, the forensic psychiatric examination points to ‘Little Nicolás’ as having clear signs of Narcissistic Personality Disorder (NPD), where the sufferer displays outward signs of inflated self-worth, sense of entitlement and inability to make meaningful connections with others beyond their ‘usefulness’, typically as helping their image.

Some NPD sufferers have delusions that go beyond mere self-importance, causing them to actually believe they are a celebrity or in possession of special powers, spiritual or of authority.

‘Little Nicolás’ – who hates his public nickname and says he has always been known as ‘Fran’ – first came into the spotlight in 2014 when he was 19, claiming he was ‘helping the State’ and that the government was ‘afraid’ of him because of ‘what he knew’.

He has faced criminal trials for impersonating public authority, but insisted his claims were true and that he was sent out in chauffeur-driven cars and put up in top hotels under assumed names.

Gómez claimed the CNI illegally and regularly tapped phones used by people who ‘represent problems for statespersons’, such as himself.

In court this week, he refused to respond to questioning ‘in accordance with medical advice’, but still ensured he had the last word.

“I come from a military family – my father, mother, aunts and uncles and grandparents, who hold higher rankings than the ministry of defence itself, have always instilled in me a fundamental respect for institutions and for public figureheads who work for us all, and I have been conscious of this from a very young age,” ‘Little Nicolás’ told the judge.

“If I have said anything that could harm the reputation of the CNI, I do not have a problem with apologising and retracting my words, since the last thing I wanted to do was to cause damage to any institution or person.”