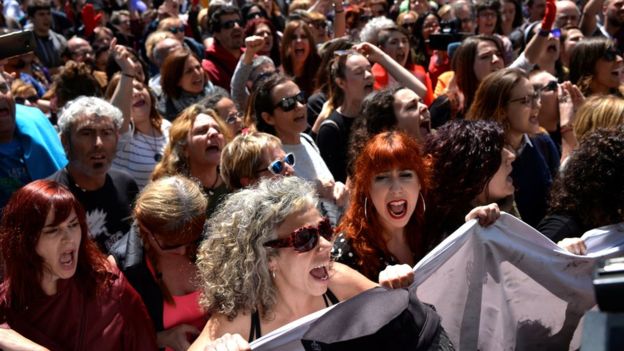 A Spanish court has jailed five men for sexually abusing a young woman during the famous San Fermin bull-running festival but acquitted them of rape.

All five were sentenced to nine years in prison for their part in the attack, which they filmed, during the festival in Pamplona in July 2016.

The 18-year-old victim’s ordeal caused a national outcry, and protests continued outside the court.

Both the woman and the defendants say they will appeal against the verdict.

“It’s rape, not abuse,” demonstrators said outside the court. Rallies have been called in Madrid, Barcelona, Seville, Alicante and more than a dozen other cities across Spain against the verdict and in support of the victim.

The five, in their late 20s and originally from Seville, and the victim, from Madrid, were not present when the judgement was read out after a five-month trial, which was held behind closed doors to protect the woman’s identity.

Under Spanish law, the charge of sexual abuse differs from rape in that it does not involve violence or intimidation.

But senior politicians and human rights groups questioned whether a prolonged sexual assault involving intercourse by five men could be anything but intimidation or rape.

Prosecutors had asked for sentences of more than 20 years.

However, one judge had argued that the men should have been acquitted of all charges except stealing the victim’s phone.

What was the case against them?

Videos of the late-night encounter between the men and the young woman showed how the five men had wandered the streets among other drunken revellers before two of them led her into a basement by the hand.

According to a police report, the men – who belonged to a WhatsApp group called La manada (wolf pack) – surrounded the woman in a small alcove, removed her clothes and had unprotected sex.

Some of them filmed the sexual act on their phones – there were seven videos, totalling 96 seconds. One of the men posted messages in a WhatsApp group celebrating what they had done and promising to share the recording.

According to the police report, the victim maintained a “passive or neutral” attitude throughout the scene, keeping her eyes closed at all times. Her phone was then stolen.

She was found in a reportedly distraught state by a couple in the street outside the scene of the attack. She told the trial she was still having psychological treatment to deal with trauma.

Some of the men were found to be in a video in which they apparently abused another woman, who seemed to be unconscious.

The “wolf pack” case has been Spain’s #MeToo over the past two years, with thousands of supporters of the victim uniting under the slogan Yo te creo (I believe you).

The shocking nature of the group abuse, the youth of the victim and the obnoxious celebratory messages about their “conquest” on their WhatsApp chat combined to make the case fertile fodder for black-and-white public opinion.

That the two majority verdict judges have chosen to see shades of grey by not interpreting the criminals’ acts as violent or intimidatory will fuel indignant criticism from feminist groups.

Several leading left-wing politicians have already questioned the verdict. The apparent certainty of an appeal hearing means the debate over whether the law protects women will continue.

Who are the men?

Supporters of the victim gathered outside the courthouse for the verdict, and were furious when it was read out.

Some donned red gloves in protest.

Women’s rights groups and many politicians reacted angrily, with Spain’s Deputy Prime Minister Soraya Sáenz de Santamaría calling on officials to analyse the verdict so that similar cases could be avoided.

UN Women programme director María Noel Vaeza said this was a “lost opportunity”, El País newspaper reports (in Spanish), urging an end to the “social impunity [in cases of] rape”.

Altamira Gonzalo, vice-president of Themis, a Spanish organisation of women jurists, told Efe news agency: “It should have been a courageous sentence. The courts can’t be so distant from society”.

Socialist party leader Pedro Sanchez tweeted his outrage (in Spanish): “If what the ‘wolfpack’ did wasn’t group violence against a defenceless woman, then what do we understand by rape?”

The victim’s lawyer said he was “disappointed” while lawyers for the five men said they would appeal, calling the verdict “unfair”.