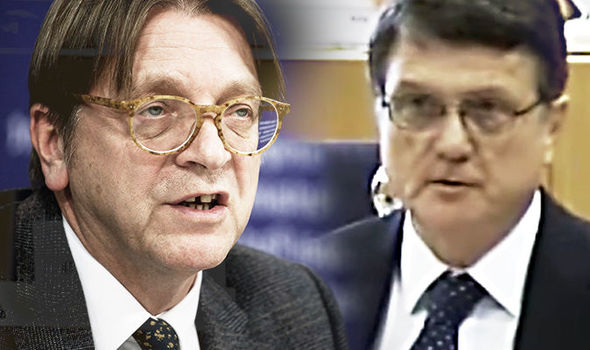 BREXIT could be under threat if the final version of the EU withdrawal agreement is rejected by MEPs and therefore traps Britain in the European Union, warned British MEP Gerard Batten.

British MEP Gerard Batten warned there could be a Brexit in name only if the likes of European Parliament Brexit coordinator Guy Verhofstadt offer Britain with a bad Brexit deal, to which the UK Government then accepts.

Speaking in European Parliament on Wednesday about the EU withdrawal agreement, Mr Batten said: “I can foresee a situation where we could end up with a withdrawal agreement which is something I have been warning against for some years – ever since this process started.

“And this is where we seem to be guided to now, not just by Mr Verhofstadt but our own government who are caving in on everything and are completely and utterly useless in the negotiations.”

The Ukip MEP then warned that MEPs in European Parliament could vote against the withdrawal agreement.

Mr Batten said: “When that withdrawal agreement comes before Parliament, I can foresee that there will be people in Parliament who will vote against it because they think it doesn’t go far enough.

“And there will be people who vote against it, for example, something I might do, because it goes too far.”

On Wednesday, Mr Verhofstadt admitted that MEPs are prepared to veto the Brexit withdrawal agreement unless there is “100 percent assurance” of no hard border appearing on the island of Ireland.

Mr Verhofstadt was updating MEPs on the constitutional affairs committee on Brexit when he said Parliament would not give consent to any deal unless the Irish border issue is resolved.

A backstop has been included in the draft withdrawal bill by Brussels, which would mean Northern Ireland remains in the customs union after Brexit if the Prime Minister fails to deliver on her promise.

Brussels published a preliminary draft withdrawal treaty in February, which states the European Court of Justice must retain legal authority to adjudicate any disputes that arise in relation to the withdrawal treaty – including any disagreements on citizens’ rights or the UK’s continuing financial obligations to the EU.

Prime Minister Theresa May was enraged by the proposals and said they would “threaten the constitutional integrity of the UK”.