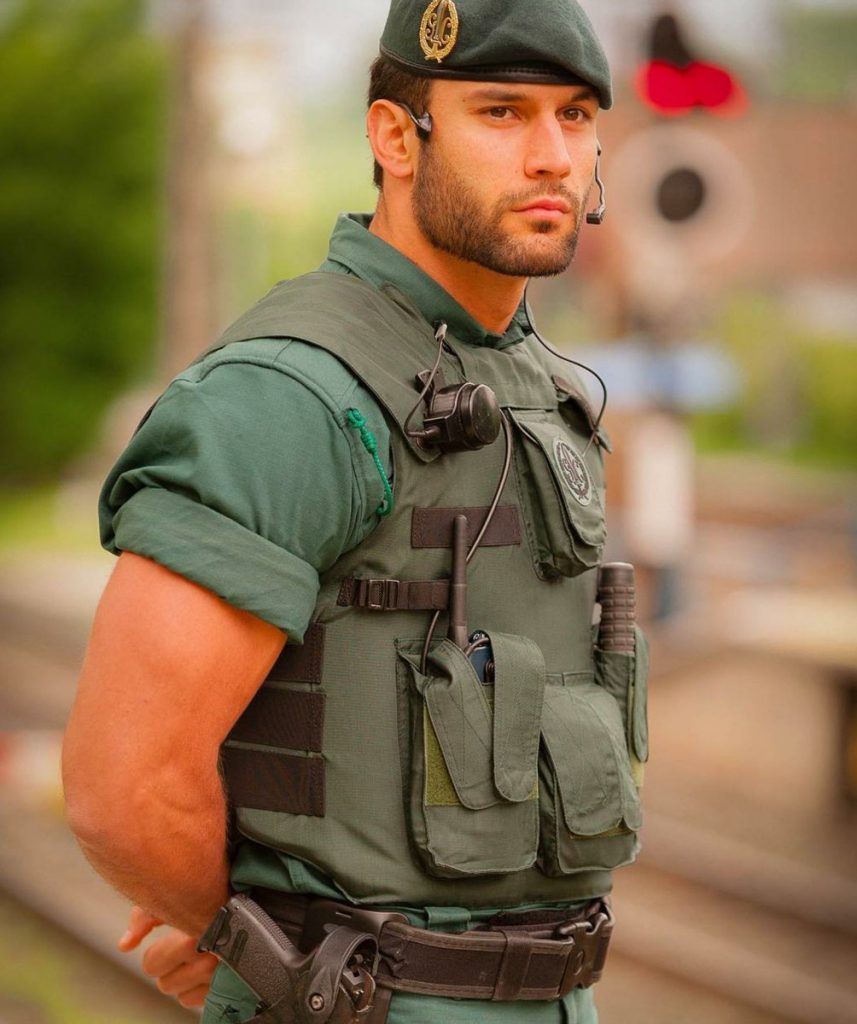 Jorge Pérez Díez finds unexpected fame after striking photo of him in his uniform is shared on social media.

A few weeks ago, the community manager in charge of the Spanish Civil Guard’s Twitter feed decided to post a photo of one of its officers in a bid to promote the force’s “closeness” to the general public. “Even though you see us wearing a uniform on the outside, on the inside we’re no different from you. We work for your freedom and safety.”
The tweet spread like wildfire, but it wasn’t so much because of the message as the fact that the officer in the photo looked as if he was straight out of a fashion campaign, or an ad for a gym. The post prompted plenty of curiosity as to who the officer was and whether or not he really was a member of the Guardia Civil, Spain’s oldest law enforcement agency.

And the answer is… yes, he is. Jorge Pérez Díez was born in 1983 in Reinosa, in the northern Spanish region of Cantabria, and he joined the Civil Guard in 2005 because he wanted to help “take care” of others in some way. He used to work on counter-terrorism and narcotics operations in the Basque Country and Catalonia, but now watches over security issues in Aguilar de Campoo, a village with a population of 7,000 souls. He moved here out of love, as his wife is a native of Aguilar.

One Monday afternoon in April, Pérez was with his oldest son (he has three children), helping him with his violin practice, when he started to receive non-stop messages via WhatsApp. Friends and acquaintances were sending him screenshots and links to the Civil Guard tweets. “I can’t tell you what it felt like,” he explains to EL PAÍS from Aguilar de Campoo, describing moments of confusion, and then enduring surprise. The photo was taken by the Civil Guard communications department more than three years ago in San Sebastián, and since then Pérez had been trying to get hold of it.

“One day a few colleagues came up from Madrid to spend the day with us [Pérez was part of the Rapid Response Group at the time] and document our work,” he explains. “One of the photographers showed me the picture and I asked him for it. He told me that they would send it to the base in Logroño and that I could order them there, all the photos I wanted, in a couple of weeks. […]

The first time I changed a diaper six years ago I ended up ripping off the tabs; now I can do it with one hand

“When they sent them to me I realized they were all there except that one. I thought, damn it! All of them except the one I wanted. That was the end of it until three months ago, when I remembered the photo. And then suddenly that night it appeared on social media.”

He explains that he never imagined it would cause such a fuss. “I’m flattered by all the affection and goodwill from people, and also the compliments, of course, and I’m taking it all with a good sense of humor,” he explains. He adds that he realizes that people’s looks are subjective, and is not too concerned about the issue. “I am clear about how I feel about myself, and if anyone has to like me, it’s my wife,” he says.

Pérez Díez is married and has three children, a large family that “works like an Olympic team.” He gets up, makes breakfast, takes the children to school, works, and trains to run in obstacle course races. “I can’t understand how things could be any different. In a family you need to have a connection and coordination with your partner. You learn bit by bit. The first time I changed a diaper six years ago, I ended up ripping off the tabs because I just couldn’t put them on; now I can do it with one hand.”

Pérez says that every day he gives thanks for what he has and for the closeness he enjoys with his neighbors, who treat him as if he were part of their family – exactly the intention of the Civil Guard tweet.

He is aware that the Civil Guard still has a way to go before it can completely modernize its image, and that it still suffers from a lingering stereotype from the 1960s of a sexist, repressive and aggressive force that, in part, “can be changed thanks to this new relationship we can establish with citizens via the social networks. […] Every day new officers are joining, and they are keen to learn and rise through the ranks. They’re youngsters who take great care of themselves and who practice sports. It’s vital to connect with citizens from this new perspective.”