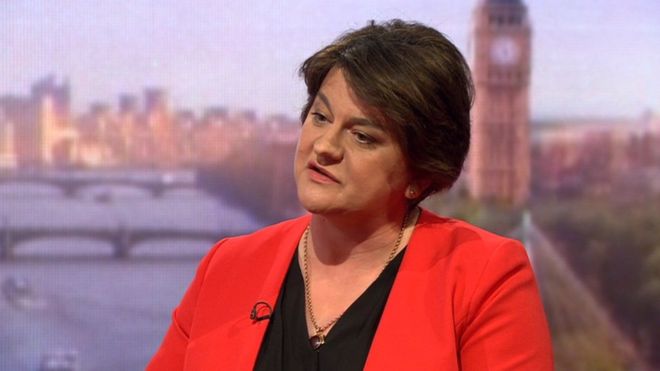 DUP leader Arlene Foster has said she she would like the European Union to take a more sensible approach to the Brexit negotiations.

Mrs Foster said she would like to see less rhetoric and more engagement from the EU on the way forward.

The EU’s chief negotiator, Michel Barnier, was in Northern Ireland earlier this week.

Mrs Foster said she regretted the tone of what he had to say.

“What he [Mr Barnier] was saying was that it was up to the UK to come up with a solution and they would wait for that solution to come and that is not the way forward,” Mrs Foster told the BBC’s Andrew Marr show.

“The way forward is to have a negotiation where both sides are engaged in the negotiation and we look for a solution that will make the difference.”

Mrs Foster said the DUP did not believe that the UK needed to stay in the customs union to have “free flow between ourselves and the Republic of Ireland”.

“In August of last year, the government put forward various proposals,” she said.

“We were disappointed there was not the engagement from the European Union at that time.

“What we would like to see from the European Union is less rhetoric and actually more engagement in relation to the pragmatic way forward.”

On his visit to Northern Ireland, Mr Barnier said that the EU would consider “any solution” on Brexit which would allow it to maintain the integrity of the Belfast Agreement.

He said that it was important to maintain relationships in Northern Ireland.

He previously told a press conference on 30 April at the beginning of the all-island Brexit forum that his “door is open” to Arlene Foster and the DUP.

He said he had not approached the negotiations in a “spirit of revenge”.

The UK government has said it is leaving the customs union but ministers have not yet agreed what will come next.

Prime Minister Theresa May asked officials to draw up “revised proposals” after last week’s meeting of her key Brexit committee.

Mrs Foster said she had a telephone conversation with Mrs May on Saturday about customs solutions.

All EU members are part of the customs union, within which there are no internal tariffs (taxes) on goods transported between them. There is also a common tariff agreed on goods entering from outside.

The UK government has said it is leaving the EU customs union so that it can strike its own trade deals around the world, something it cannot do as a member.

This means the UK and the EU will have to agree a new arrangement for what happens at their border post-Brexit.

The UK is under pressure to make progress on the issue before next month’s EU summit.