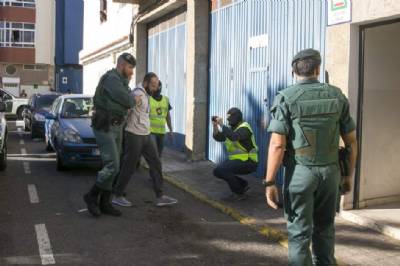 THREE men have been arrested in Tenerife on suspicion of sending a terrorist recruit to Syria to fight with the Jihad organisation Al-Nusra.

National Police say the recruit, a 35-year-old Moroccan, was ‘radicalised’ in an internet café in San Isidro run by his three compatriots aged 27, 35 and 37, and also at the local mosque.

They trained their quarry to be a so-called ‘foreign fighter’, acting as ‘spokesmen, Imans and custodians’ at the mosque, according to investigators.

They lured the ‘foreign fighter’ over to the Jihad cause and arranged for him to go to Syria in 2013, including funding his trip.

He returned to Spain, fully trained, in 2015, but badly injured, having lost his left hand in combat.

Soon after going back to Tenerife, he moved on again and decided to pose as one of the refugees fleeing from Syria and Libya in central Europe, using fake passports and cash provided by his captors.

But he was arrested in Budapest, Hungary, and extradited to Morocco.

Said to have an existing police record for drug-related offences, the ‘foreign fighter’ escaped custody in his native country and his whereabouts remain unknown.