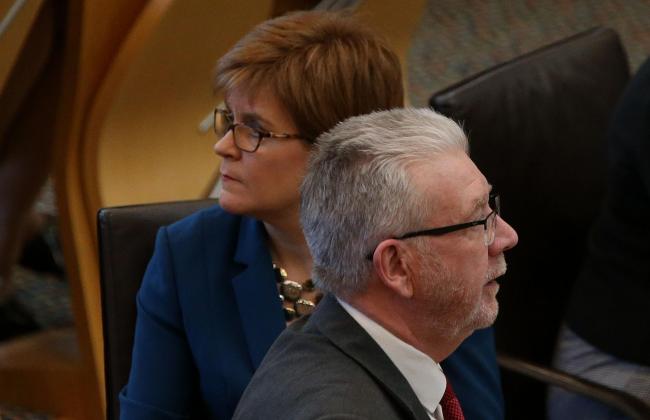 THERE is now “no easy or clear path” to averting a constitutional crisis over Brexit and devolved powers, Nicola Sturgeon’s office has admitted.

With a week until a crunch Holyrood vote on the EU Withdrawal Bill, the First Minister’s official spokesman said both sides appeared to have reached their final positions.

“I’m just being realistic… I don’t see any progress beyond where we were,” he said.

A meeting between SNP Brexit minister Michael Russell and the UK government in London last Wednesday failed to end a year-long stalemate between the two sides.

Mr Russell updated the Scottish Cabinet on the lack of movement this morning.

There are no more ministerial contacts scheduled before MSPs vote on whether to withhold legislative consent on the EU Withdrawal Bill next Tuesday, ahead of its final stage in the House of Lords.

If they withhold consent, it is likely to lead to a series of unprecedented consequences.

The Scottish and UK governments will square off at the UK Supreme Court over the validity of Holyrood’s alternative Brexit Bill, and the UK Government will probably impose the EU Bill on Scotland against the Scottish Parliament’s wishes.

The UK government wants to temporarily reserve around 24 devolved areas which will be repatriated from Brussels next year, most related to agriculture and the environment.

London says this is necessary to create UK-wide frameworks to protect the internal market.

Ms Sturgeon insists these frameworks must be agreed by consent, not imposed.

However the UK government says Westminster must have the final word, and Ms Sturgeon’s demand would give Holyrood an unprecedented veto over legislation in the rest of the UK.

Ms Sturgeon’s spokesman said there had been no “significant movement” since last week’s meeting, and it was a case of “as you were”.

He said: “Time is very short. We’ve not given up. We are still seeing if we can find a way through. But given where things have reached there’s no easy or clear path through this given that the UK Government appear to have reached a point where they don’t appear to be prepared to move further and we equally have a point of principle on the issue of consent.”

Last week, Scottish Secretary David Mundell suggested a “third way” would have to be found to break the deadlock, although he admitted it was unclear what it might be.

Echoing his comments, Ms Sturgeon’s spokesman said: “I’m not sure what that something new could or would be.

“We certainly see it as a point of principle, the UK have their own position.

“I’m not saying it’s impossible. I’m not saying we won’t continue to engage but I’m just being realistic that at the moment I don’t see any progress beyond where we were.”

He said there was nothing currently in ministers’ diaries for a meeting or call with UK ministers on the issue before next Tuesday, although that could change at the last minute.

A UK Government spokesperson said: “The UK Government has made very significant amendments to Clause 11 of the EU (Withdrawal) Bill.

“Our approach provides certainty to businesses as we leave the EU, and fully respects the devolution, as the Welsh Government acknowledge.

“We still hope the Scottish Government will come on board and our door remains open.”