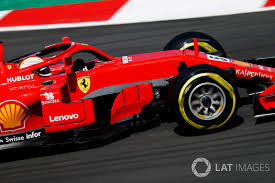 Four-time world champion Sebastian Vettel has expressed confidence that Ferrari will continue to dominate in Barcelona.

Ferrari are currently standing at the top spot in Formula One Constructors’ Championship behind Ferrari, with many pundits claiming that the Italian team can finally clinch their first drivers’ title since 2007 this year.

Meanwhile, Mercedes had performed brilliantly in the pre-season tests in Barcelona, where this weekend’s Spanish Grand Prix is to be held.

However, Vettel played down the same, saying they will surely win the upcoming race because their pace is good.

The German driver further insisted that Ferrari cars have been comparatively better in 2018 as compared to the past few years.

“Especially in qualifying we were not competitive enough in previous years,” Vettel concluded.

Vettel is currently standing at the second spot in the drivers’ championship, trailing Mercedes rival and championship leader Lewis Hamilton by four points.