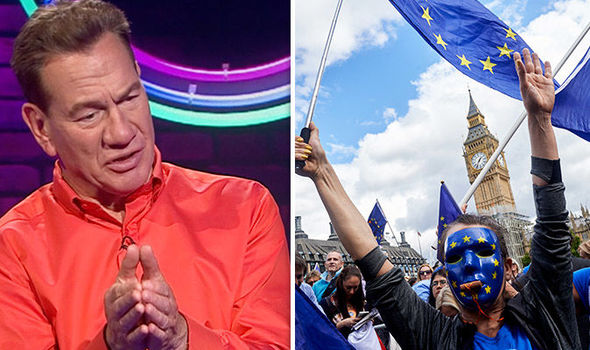 A REMAIN win in the 2016 Brexit referendum could have resulted in Europhiles forcing Britain into a United States of Europe, warned former minister Michael Portillo.

Former Tory MP Michael Portillo said it was “necessary” to vote for Brexit or the country could end up in a European federal state – meaning it would join the euro and be forced to form an EU army.

Speaking on BBC This Week, Mr Portillo said: “I think the thing that really matters about leaving the European Union is that we separate ourselves completely from the movement towards a European federal state, a United States of Europe. I think that has been achieved.

He added: “But the problem when we had the referendum was that if we voted to Remain then the Remainers would have said ‘you have now settled your European destiny.

“We should now contemplate going into the single currency, we should contemplate moving forward with political unions’ and so on. This is why it was necessary to vote to leave.”

But Mr Portillo warned he is “agnostic” about trade arrangements, a customs union and the single market after Brexit.

He said that remaining in a customs union is “bonkers” and Remainers could use it to keep Britain in the Brussels bloc.

Mr Portillo said: “What I will say is that if we arrive at a situation where we are effectively in a customs union and a single market but we have no say over the rules then obviously that is an unstable position.

“It cannot possibly last because no one can possibly think that that is a good idea. If that is where we end up, then the battle over Europe will simply continue.

“That is why I think the Remainers are putting so much effort into getting us into pretty much a single market, pretty much a customs union because it will be unstable and it will require us either to go back into the European Union or to have another great fight and get out properly.”

Hungarian Prime Minister Viktor Orban said on Thursday that the EU should give up the “delusional nightmares” of a United States of Europe.

In his first speech in the new parliament, he promised to boost growth and competitiveness and reverse a demographic decline. “We will oppose the mandatory migrant settlement quotas… and will fight for the protection of borders.

“The EU must give up the delusional nightmares of a United States of Europe; the EU must return to the grounds of reality. As a first step, it must change its thinking about migration.”