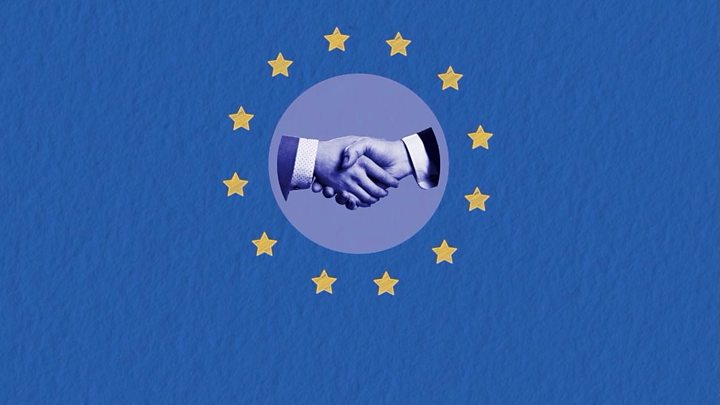 Theresa May should “step aside” and let Labour do the Brexit deal if she cannot even get her ministers to agree on their aims, Jeremy Corbyn has said.

The “uncertainty” facing the UK because of the lack of cabinet agreement on future trade plans was holding back economic growth, Labour’s leader said.

Major employers were considering moving jobs abroad because of the “complete disarray” in negotiations, he said.

But the PM said Labour would “sell Britain short” if it was in power.

Hailing the record number of jobs being created in the economy, she told MPs that only a Conservative government would deliver a Brexit in the national interest and ensure a Britain that was “fit for the future”.

Mr Corbyn said only Labour was committed to negotiating a full customs union with the EU that protected jobs and living standards but Mrs May insisted that this was achievable through a new customs arrangement which also ensured an independent trade policy and settled the Irish border issue.

Earlier, senior ministers acknowledged there has been “serious criticism” of both proposed models for the UK’s customs arrangements after Brexit.

Cabinet Office Minister David Lidington said there were fears a customs partnership might “inhibit” the scope to do trade deals and the task was how this could be “mitigated”.

The alternative, a technology-based solution, could have “adverse” effects on the Northern Irish border, he added.

The UK is under pressure to choose one option before a key EU summit in June.

It is currently seeking to decide which of the customs options it prefers before getting stuck into detailed negotiations on the issue with the EU, which has already cast doubt on the feasibility of the proposals.

And Irish Prime Minister Leo Varadkar told the Dublin parliament on Tuesday that the customs partnership “isn’t workable” but added that he thought it was still “closer to being made workable” than the other so-called ‘max fac’ option.

The UK is due to officially leave the EU on 29 March 2019, with a transition period intended to smooth the way to the permanent new relationship, due to run until 31 December 2020.

On Tuesday, Downing Street announced it would publish its blueprint for post-Brexit UK/EU relations in the form of a White Paper before the June summit. This would set out its Brexit position and be its “most significant publication on the EU” since the 2016 referendum.

Many subjects, including aviation, financial services and fisheries are expected to feature.

Mr Lidington, who is regarded as one of Theresa May’s closest allies, told BBC Radio 4’s Today programme the document, which will extend to more than 100 pages, would “demonstrate we have thought this through” and show the scale of the UK’s ambitions.

Pressed on the lack of a decision about what would replace the UK’s current membership of the customs union, which allows for tariff-free trading between members, Mr Lidington suggested both options had drawbacks which needed to be addressed.

“There was serious criticism made about the technical detail of both of the models that are on the table,” he told Radio 4’s Today.

“For example, on the new customs partnership idea, the questions are around to what extent does this inhibit an independent trade policy for the future and can we mitigate those impacts.

“The other one is does it affect Northern Ireland in an adverse way and can we mitigate the impact of that?

“What any government does is that when we are putting forward internally some ideas about relationships with other countries, new treaties, that we test the legal risks involved.”

The BBC’s political editor Laura Kuenssberg said several cabinet ministers had acknowledged privately there could be an extension of the UK’s customs union membership to give time for a solution to be developed.

Writing in ConservativeHome, former minister Nick Boles said transitional membership should be extended until March 2022, arguing the political timetable should be adjusted to “reflect the reality on the ground”.

“That way we can still deliver Brexit in full by the time of the next election, while giving British business the benefit of a gradual transition to a robust new system,” he wrote.

He also warned he would not support “speculative measures that will harm British businesses and cause chaos at our borders”.

“If the government insists on driving through an unrealistic policy simply to satisfy the demands of a few of my more ideological colleagues, I will find myself in the division lobbies voting against my government for the first time in my parliamentary career,” he said.

Mr Lidington played down talk of an extension, suggesting the Article 50 process – governing the terms of the UK’s withdrawal – might not allow for this.

“Not only are we not asking for a longer transition period but the EU has always been very clear you can’t use Article 50 to talk about the long-term future relationship,” he said.