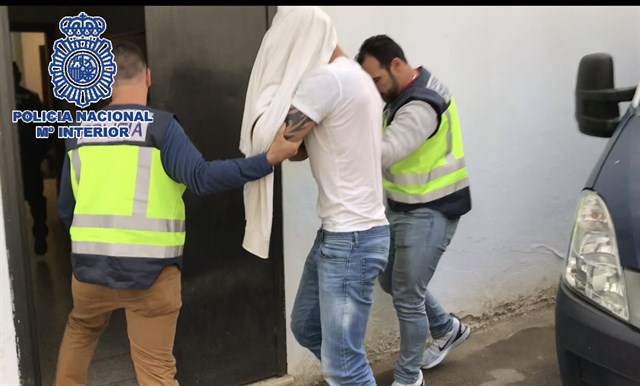 A British fugitive on the run for armed robbery in Essex has been arrested on the Costa del Sol.

Stevie Atkins, was detained in Marbella on a European Arrest warrant two months after Essex police issued a public appeal for his whereabouts.

He was arrested after being stopped by a Spanish National Police patrol at 2am on May 8th.

Police became suspicious when he presented false identification and discovered he was on the UK wanted list.

According to Spanish police he had 75 false identities and offered officers €500 cash if they let him go and act that earned him a bribery charge too.

Essex police had launched an appeal for Atkins in March adding that he had known links to Mijas and may have fled to the Costa del Sol.

He was described as 6ft 4ins tall, muscular, and has a prominent scar under his right eye and a tribal tattoo on his left arm.

Essex police released these two photographs of him at the time of the appeal.

He is a suspect in an armed robbery in which two security guards were robbed of almost quarter-of-a-million pounds at gunpoint.

The robbery of a security van took place outside a supermarket in Witham, Essex on December 14th, 2016 when two balaclava-clad men wielding a double-barrelled shotgun jumped the guards as they stopped to refill a cash machine.

One of the guards was forced onto his knees while the other was ordered to remove money from the van.

No shots were fired and no-one was injured during the incident.

Joe Turner, 29, from Dagenham, was jailed for 15 years last summer after admitting his involvement in the raid.

He has been remanded in custody ahead of extradition proceedings.

Is Putin ill? A British former spy reports on the health of the ...

Drowned, 2 men who went to help bathers and also a child caught by the...

Mutilated and with serious emotional trauma, so arrive in Spain the ...