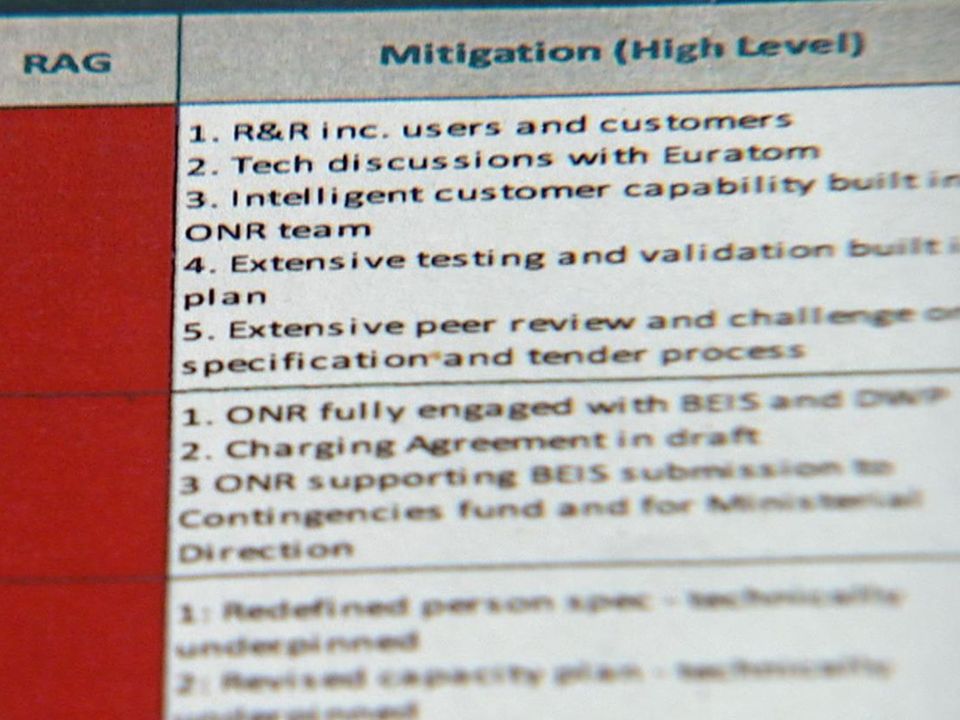 Late delivery of an IT system and difficulty recruiting qualified inspectors are blamed in the leaked reports.

There are five “high level risks” Britain needs to address before Brexit, identified by the UK’s Office for Nuclear Regulation (ONR).

They were all categorised as “red” on a red, amber, green alert scale in an internal “Risk Register”.

Problems include “late delivery or ineffective” new IT systems to track nuclear material.

Recruitment difficulties and a lack of training for inspectors are also cited, as are failures to arrange the “comprehensive handover” of hardware and equipment from the EU agency Euratom.

On top of the issues, concerns were also raised about long-term funding of the new nuclear regulator.

Testing of this mandatory system, currently carried out at European level, will only now begin in summer at the earliest.

It must be up and running by the end of the year, to run in parallel with the European system before theoretically being ready to take over in March 2019.

Progress towards recruiting 25 nuclear safeguards inspectors has also been slow.

The Risk Register assessed as red the “High Level Risk” that the ONR is unable to train and warrant an adequate number of new inspectors in time.

Separately, a failure to “recruit enough people with the right skills to deliver a UK State System of Accountancy for control of nuclear material to meet international obligations by 2019” was also a red risk.

The document lists seven ways that risk can be mitigated, including “redefined person spec” and that standards may be lowered to plug the skills gap, suggesting there are insufficiently trained personnel.

The Business Department did say in a recent update to parliament that 13 inspectors and trainee inspectors had been recruited.

Parliamentary sources have raised some doubt that they could be trained in time, claiming it takes five years to train a safeguards inspector fully.

The key underlying risk of not being prepared for Brexit day is identified by the Risk Register as a lack of secure funding.

Subsequently, the Business Department has released £8m in two tranches to fund this activity, but industry sources are still highly concerned that the systems will not be in place.

But if Britain quits the EU without a deal and IT systems are not ready, the legal basis of trade in nuclear material, parts and expertise would disappear.

Nuclear operators have warned of shutdowns to nuclear power stations, and the transfer of crucial medical isotopes being blocked in such a scenario.

Most industry sources are pinning their hopes on an agreed transition within the Euratom system, as outlined in March by the EU’s chief negotiator Michel Barnier and UK Brexit Secretary David Davis.

Rachel Reeves, chair of the Commons’ influential business select committee, said the Government’s plans in such a short time-scale were “going to be incredibly challenging, if not impossible”.

She told Sky News: “We rely on nuclear energy to light our homes, to keep our economy going.

“And if there is any risk at all that leaving Euratom is going to leave us with a less robust regulatory regime or not being able to import and export the things we need to keep the lights on, the Government need to face into that and put in place proper robust plans to do so.”

She added: “I think we can have cooperation in the area of nuclear energy that doesn’t defy the will of the people.”

Tom Greatrex, chief executive of the Nuclear Industries Association, also told Sky News: “If no deal means no transition then this is a very exacting time frame to try and do everything by.

“I’m not at all confident that we can get everything done by March 2019.”

Sue Ferns, senior deputy general secretary of the Prospect union, also said: “It is hard to think of anything more important than making sure the UK has a fully operational nuclear safeguards regime after Brexit.

“But the reality is that the totally unnecessary decision to pull the UK out of a nuclear regime that has served us well for years has left civil servants racing against the clock to create a whole new safeguards regime from scratch.

“This is the wrong way to approach something of such critical importance.”

The International Atomic Energy Agency is meeting in June and on the agenda is approving the UK’s new domestic nuclear safeguarding arrangements.

The industry fears this deadline will be missed – and the next opportunity will not arrive until September.

A spokesperson for the ONR told Sky News: “Good progress has been made on the procurement of the new IT system and on the recruitment and training of new safeguards inspectors.

“We are confident that these will be in place to ensure we meet international obligations for day one of exiting Euratom.”

The Business Department said: “The Government has made significant progress in preparing to leave Euratom to ensure safeguards are in place from day one.

“The Nuclear Safeguards Bill is making good progress through Parliament and we continue to work closely with the Office for Nuclear Regulation to ensure we continue to have a robust regime in place.”