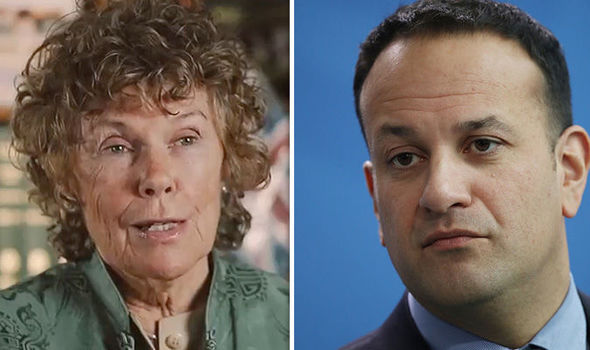 BREXITEER Kate Hoey took apart concerns over the Irish border saying that the current arrangements could be tweaked to accommodate any changes Brexit brings around.

Speaking to Labour Tube, Ms Hoey argued an invisible border between the two countries is already managed by technological measures and the only reason the Irish Prime Minister Leo Varadkar is opposing Theresa May’s alternatives to the EU customs union is to try to keep the UK in the Brussels bloc and thwart Brexit.

The Labour MP claimed the repercussions of Mr Varadkar’s refusal to cooperate with the Prime Minister could make the Uk leave the bloc without a deal costing the Republic of Ireland a lot more trouble than the UK.

She said: “I find it really disappointing the way the Irish Government is in hock with the EU Commission to use the question of the Irish border as a weapon to try to get the United Kingdom to stay in the customs union and in the single market.

What people forget is there is a border there already and it may not be very visible but it is there.

“The Republic of Ireland has a different currency, has different excise duties, has corporations tax at different levels.

“All of that at the moment is scrutinised in many different ways using technology.

“So we do have cameras near the border, we do have number plate identification, we do have people been stopped and lorries occasionally being stopped at the moment.

“There is a border there and with the right goodwill, it works very well at the moment.

“There is a lot of cooperation between the two countries’ customs officers and security and police.

“With the right will, there is no reason why that could not continue when we leave the European Union.

“My view is that the new Taoiseach who has changed the attitude of the Irish Government to Brexit from his predecessor who was being very cooperative really needs to look at what he’s doing and to stop using the Belfast agreement as some kind of weapon against Brexit.”

The Irish Prime Minister has dismissed both of Britain’s proposals for the future customs arrangements with the EU as unworkable, casting doubt as to whether a withdrawal agreement will be in place by October.

Mr Varadkar was repeating a warning that a failure to achieve real progress on the customs union by next month could throw doubt on sealing an overall withdrawal agreement by the deadline later this year.

Prime Minister Theresa May’s cabinet remains divided, with a number of pro-Brexit ministers dismissing what is believed to be her preferred option – a customs partnership.

This would involve the UK acting on behalf of the EU when imports arrive from the rest of the world.

It would see the UK apply the EU’s own tariffs and rules of origin to all goods arriving in the UK that are intended for the EU.

Pro-Brexit ministers prefer a streamlined customs arrangement known as maximum facilitation or “max fac”, which would aim to create as frictionless a customs border as possible, rather than removing it altogether.

This would see it employ new technologies – some of which are still being developed – and automation to streamline procedures while removing the need for physical customs checks wherever possible.

But both methods have been rejected by the EU, adding to momentum for Remainers who believe that remaining in the customs union is the only viable option if Britain is to solve the Irish border problem.